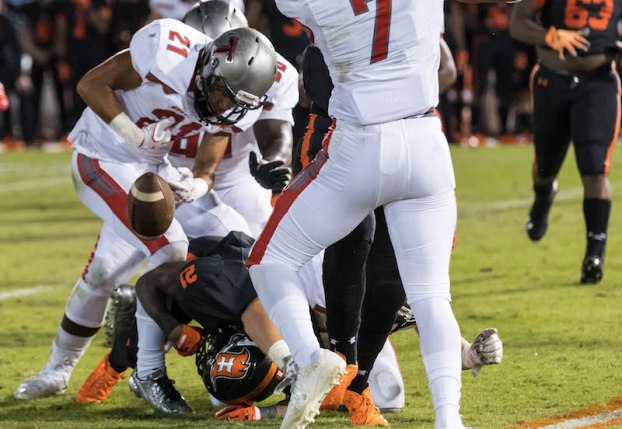 The AHSAA has approved instant replay for all member high schools to use during the upcoming football season. (Reporter photo/Neal Wagner)

MONTGOMERY – The Alabama High School Athletic Association has received permission from the National Federation of State High School Associations to provide instant replay for member schools for up to three years beginning with the upcoming 2018 football season.

The decision was made at a recent board meeting and was announced at a press conference on Thursday, April 12, in Montgomery.

The AHSAA is partnering with DVSport, Inc., a Pittsburgh based software company, which has provided instant replay solutions in NCAA college football since 2005.

“This has been a long process and we’ve worked on it for a long time,” AHSAA Excecutive Director Steve Savarese said. “We’re excited to allow our officials to have the same tools on the sideline as our coaches.”

Participation in the new program will be optional for teams at every level at competition and the hope is every classification will buy into the change.
Most of the NCAA’s major conferences use DVSport instant replay solutions including the Southeastern Conference, Atlantic Coast Conference, Big Ten, Big 12, Pac 12, Ohio Valley, Sunbelt, SWAC, Missouri Valley, Mountain West, Big South, Big Sky, Colonial, MAC and MEAC conferences.

DVSport also provides instant replay for the College Football Playoffs, FCS, D-II, D-III playoffs and NAIA championship game.
“We are grateful to the NFHS for approving our request,” Savarese said. “While this replay process is in the initial stages of development, the AHSAA is committed to working with DVSport and the NFHS to develop a cost effective process to assist both our coaches and officials. In addition, all football state championship games will use the same replay fan experience DVSport provides for SEC contests.”
NFHS Executive Director Bob Gardner said the NFHS permits state associations to experiment in certain situations to determine the future viability of rules changes.

“As technology improvements evolve, the use of instant replay is an area of interest for the NFHS Football Rules Committee,” he said. “We welcome the Alabama High School Athletic Association’s experiment in use of replay in the 2018 season.  We hope to learn the advantages as well as any problems associated with replay from the use in Alabama.”

The AHSAA, which has been actively studying instant replay options for the last five years, along with DVSport instant replay solutions, will collect and study the data over the next year with a possibility of three years of experimentation.

“Alabama is at the forefront of using cutting-edge-technology in the high school athletics setting, and with its deep football roots, it is a perfect place for this partnership to begin,” said DVSport CEO Brian Lowe.

DVSport replay technology gives officials the ability to review video from multiple camera angles within seconds of the play happening. Once a coach challenges a play, the on-field referee will be able to review a play on a system located on the sideline.

The AHSAA said it would be done at a minimal cost, which will be negotiated with DVSport.

Each team will get two challenges per game. Once they have decided to throw a challenge flag, the officials will meet on the field to watch the replay.

If the team challenging wins the challenge, that team will still have two challenges left, while a timeout or a delay of game penalty will be charged to a team that loses a challenge.

Coaches are expected to trust in the system as multiple video angles are supposed to be available for each review.

Officials will be trained on the matter throughout the spring and will test it at a select few of spring games before going through more training during the summer leading up to the 2018 season.

Teams will not be able to challenge penalties with the new replay system, nor will forward passes past the line of scrimmage or targeting be reviewable.

The AHSAA later contradicted itself slightly when they said the minimum number of cameras will be one with no maximum.

“Event with one camera, it could provide the opportunity to correct an error,” read a slide during the press conference. “If not, we are no worse off than we are now without instant replay.”

In that same slide, the AHSAA said each replay could take two-to-four minutes of time, which could add an average of 10-20 minutes to a game that is already two hours and 15 minutes long on average.