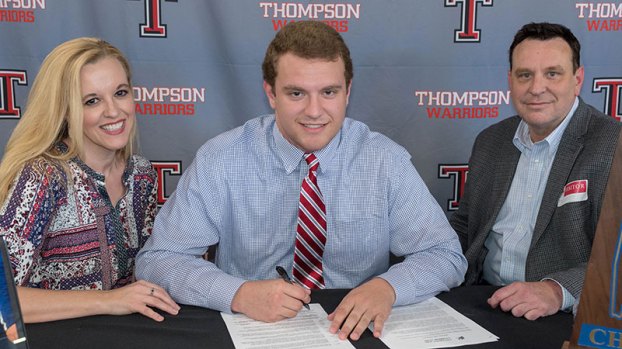 Seth Whitlock, center, signs a wrestling scholarship with the University of the Cumberlands while surrounded by his parents during an April 13 ceremony in the THS cafeteria. (Reporter Photo/Neal Wagner)

ALABASTER – Thompson High School’s Seth Whitlock will be wrestling collegiately after signing a scholarship offer with the University of the Cumberlands in Williamsburg, Kentucky, during an April 13 ceremony at THS.

Whitlock originally was planning to focus on football after his high school career, and had signed with Millsaps College in Jackson, Mississippi, during a February football signing ceremony.

But since then, Whitlock has received significant attention from multiple collegiate wrestling programs, and decided to shift his focus to the mat and sign with Cumberlands.

“I want to thank God for giving me this opportunity to be here. I just want to thank my coaches, my teammates, my friends and everyone for helping me to get here today,” Whitlock said. “It’s an honor to continue wrestling at University of the Cumberlands.”

Whitlock has played a major role in the THS wrestling program’s success over the past several years.

In the state quarterfinal round, Whitlock took down Auburn’s Dimitri Anderson 3-1 to move on to the semifinal, where he won 3-2.

From there, Whitlock took on Lee-Montgomery’s Camron Hill, who was disqualified after committing too many technical fouls, allowing Whitlock to earn the title.

By SETH HAGAN | For the Reporter ALABASTER – Thompson baseball is still alive in the 7A playoff race thanks to... read more