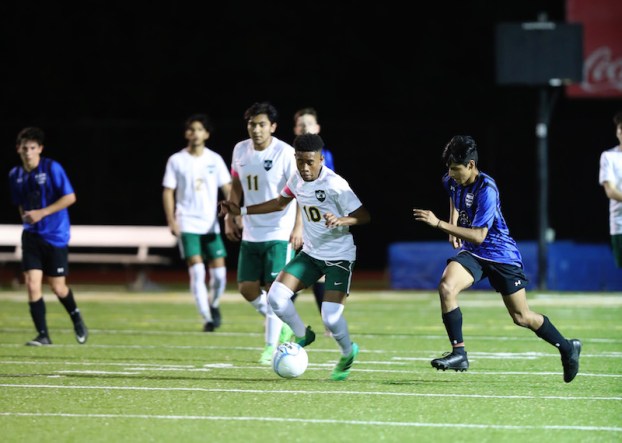 Pelham was able to pick up a 3-0 shutout against Chelsea on April 13, to keep them in the running for an area championship and clinch a playoff spot. (For the Reporter/Cari Dean)

PELHAM – After falling 2-1 at Chelsea on March 22, the Pelham Panthers felt as if a game had been stolen from them that they should have been victorious in.

When the two met again on Friday, April 13, the Panthers were looking for more than just revenge, but a spot in the playoffs to get the chance at defending the Class 6A state championship.

With all of the motivation and playing on its home turf, Pelham went on to shutout the Hornets by a final score of 3-0 thanks to impressive defense and goaltending, as well as a strong offensive attack.

Pelham started the game strong offensively in the first 15 minutes by forcing the ball into the Chelsea defensive zone several times. At that time, however, the Panthers were unable to penetrate for any good looks at the goal.

It took just seven more minutes for the constant attack to pay off for Pelham. In the 20th minute, Miguel Trejo was able to grab a rebound in the box before eventually sneaking a ball into the left corner of the net for a 1-0 advantage.

That constant pressure continued despite taking the lead as Chelsea’s defense was on its heels for the majority of the first half.

The Panthers got a couple of more good looks, but it looked as if the Hornets were going to get out of the half trailing 1-0.

That changed with two minutes to go until halftime when Jonathan Vazquez grabbed another rebound in the box and buried a shot quickly into the back of the net for a 2-0 lead at the half.

For the first half of the second period, Pelham kept up the intense pressure and got a few more solid chances, but Chelsea’s defense held up.

With 18 minutes remaining in the game, Chelsea was able to get one of its best looks of the night on a long free kick outside of the box. Chase Denson, however, was able to make an easy save to continue the shutout effort.

The Hornets let that spark them and over the next few minutes, they put the pressure on Pelham with several good looks. The Panthers were able to make some impressive saves and defensive plays to preserve the 2-0 lead late.

With right around a minute left, Chelsea’s depleted energy after trying to force a comeback led to a late goal from Irvin Rodriguez to post a 3-0 shutout for the final score.

Pelham is now 11-7-3 overall and 2-1 in area play with three regular-season games remaining, including one against area foe Helena that will determine whether Chelsea or Pelham wins the area championship.

The Hornets are now 11-6-2 overall and 3-1 in area play with four regular-season matchups remaining.