If words carry weight with the Community Foundation of Greater Birmingham, then Shelby Countians can hope for universal pre-school education, some form of public transit and expanded mental health care sooner rather than later.

Among other concerns—ranging from “food deserts” to work-force preparation—Shelby Countians spoke up during the first of six “community conversations” conducted by the Community Foundation of Greater Birmingham. The event, hosted by American Village in its Liberty Hall, drew nearly 100 participants to Montevallo from areas as diverse as Montevallo and Chelsea, Vincent and Alabaster, Westover and Pelham. 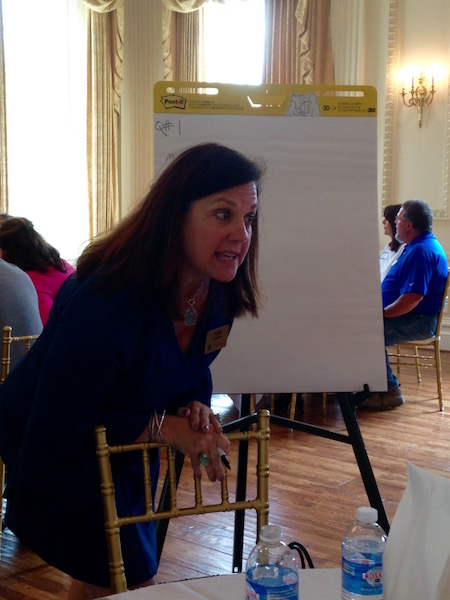 Christopher Nanni, president and CEO, explained the foundation’s purpose: It is in the enviable position of having millions of dollars to give away.

However, those millions cannot be scattered like beads from a Mardi Gras float. The idea is to find out what the people in the five-county area want, what the communities need and how projects can grow to be self-sustaining.

The April 3 “conversation” made me think of a Catholic Marriage Encounter I once attended, but the Foundation’s version was more fun and less rigid. Each round table had a “facilitator” who recorded comments on three questions. Substitute “marriage” for “community,” and you’ll get my analogy.

The participants changed tables between questions to mingle with new voices and hear new ideas. They discussed:

Yoko Young of Alabaster wants “early childhood education,” starting in infancy “to serve the needs of all.”

Herb Patterson wants to see the expansion of public transit and “an end to rush hours.”

Shelby County Sheriff’s Lt. Cody Sumners described training sessions for deputies in which they are coached in handling people with various types of mental illness. “I tell them we are all social workers now,” he said.

Sumners, who also is a member of the Chelsea City Council, said he sees a “lack of beds for the mentally ill and a need for expanded mental health services.”

I began to see a pattern among the responses—improving public transit could make it possible for more people to participate in drug court or community-based mental health therapy because they would have a way to get there, thus freeing some of Sumners’s men to practice law enforcement.

Public transit could ease Pelham City Councilman Maurice Mercer’s concern about a “food desert” in southeastern Shelby County because those residents could get to Chelsea or Columbiana.

Dee Woodham added a possible model: The Montevallo Development Cooperative District merges talents, financing and ideas from the city, the county and the University of Montevallo to make change happen.

Seniors get active with yoga, wellness

By NANCY WILSTACH / Community Columnist Let’s say that you are old enough to go to the Montevallo Senior Center and... read more