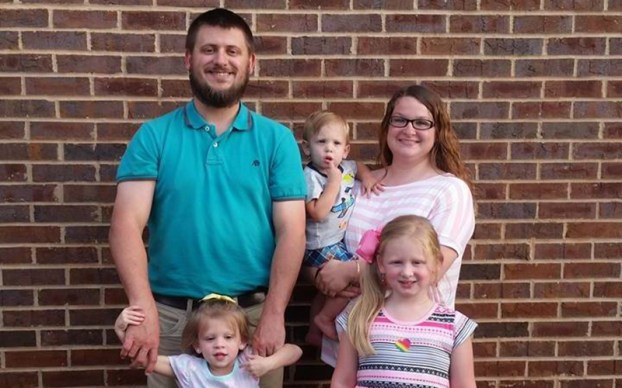 Alabaster residents Josh and Erin McCain are working to help a local widow while raising money to adopt a 9-month-old orphan from India. (Contributed)

ALABASTER – A few years ago, Alabaster residents Josh and Erin McCain were deeply touched when they heard about the plight facing millions of orphaned children around the world. Since then, they have decided to directly impact the situation.

“We have three biological kids, and we had been praying about what we should do to help and impact orphans on the other side of the world,” Josh McCain said during an April 19 interview. “One night at dinner, my wife just said ‘I think we need to have another kid through adoption.’”

The McCains agreed on the idea, and thus began their adoption journey.

Members of their church – Westwood Baptist in Alabaster – had been through the adoption process before, and pointed them toward the Children of the World organization in Fairhope.

“We met all the requirements to adopt from Indian, and we began the process a little over a year now,” Josh McCain said.

Once the adoption is finalized, the McCains will welcome 9-month-old orphan Jude from Mumbai, India, to their Alabama home.

As with any international adoption, the cost involved is high.

“The average cost of an international adoption is about $30,000, which includes travel, medical fees, agency fees immigration fees. It’s not a cheap thing,” Josh McCain said.

While Josh McCain said the family did not have a vast savings account set aside to fund the adoption, they have already raised a significant portion of the adoption cost through fundraisers such as bake sales, yard sales and crowdsourcing. Overall, with the community’s support, the family has raised about $10,000, but still needs about $12,000 to fully fund the adoption.

With the help of the Both Hands organization, the McCains have organized an event to not only help raise money for the adoption, but also help a local widow in need.

On April 28, the McCains and other local volunteers will be working at the home of Calera resident Nell Bertschinger, who lost her husband, a U.S. Army veteran, about six years ago. Today, Bertschinger is working to raise her three teenage granddaughters on her own.

During the late-April event, the volunteers will be completing home maintenance, improvements and landscaping at Bertschinger’s home, and are seeking individuals and businesses to sponsor the event while also supporting the McCains’ adoption journey.

“It’s very similar to raising sponsorship for a 5K race, but instead of running, the team is serving a widow. The funds raised help an orphan become adopted into a forever family. Both Hands – one hand for the widow, one hand for the orphan,” read a Both Hands release. “Committed to fundraising support for its operating expenses through private donors, no funds raised by a family and their team are deducted for Both Hands’ administrative costs.”

Businesses and individuals interested in donating supplies for this project should contact Josh McCain at 260-7367 or joshmccain411@gmail.com for more information.

To learn more about the McCains’ adoption journey, and to donate to their cause, visit Bothhands.org/project/mccain-7390.

PELHAM – Dozens of students gathered around the flagpole at School for Amazing Kids to watch the Matthew Blount American... read more