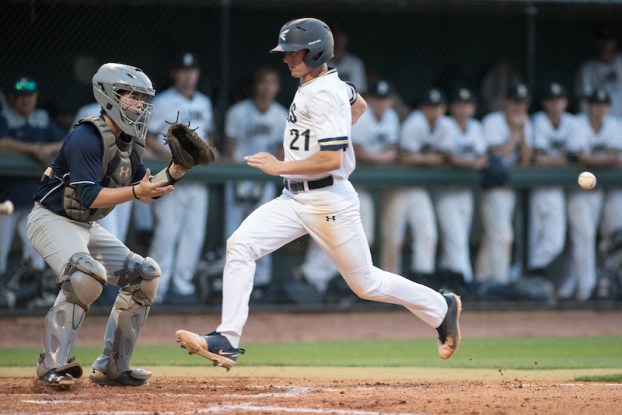 Briarwood's Hudson Hartsfield, above, went 4-for-8 at the plate with three RBIs during the doubleheader. (Reporter photo/Keith McCoy)

NORTH SHELBY – Briarwood and Beauregard are headed to an if necessary win-or-go home game on Saturday, April 21, at 1 p.m. after splitting a doubleheader to start the 2018 postseason.

In a shocking first game, Beauregard was able to pull off a 5-1 upset of the No. 2 ranked Lions, and seemingly had control of the second game before Briarwood scored three unanswered runs over the final two innings to pick up the win and stay alive. A recap from both games is below.

The Lions started off the 2018 playoff season slowly with a disappointing loss after giving up five unanswered runs over the final three innings of the game.

Briarwood took the first lead of the game in the bottom of the fourth inning when Hudson Hartsfield was able to double to right field. His double drove in Bryce Perrien, who was hit by a pitch to start the inning.

Beuregard attempted to get Perrien out at the plate, but while doing so allowed Hartsfield to advance to third with no outs on the board. After a walk to Carson Eddy put runners on the corners, the Hornets were able to get a double play and a strike out to end the inning and minimize the damage.

Trailing 1-0, Beuregard answered with a strong rally in the top of the fifth inning. A single, a stolen base and a groundout put a runner on third with one out in the inning.

The Hornets then strung together a fielder’s choice, an error, a hit batter and a single to take a 3-1 lead. The error and hit batter by the Lions ended up being key in the inning.

Briarwood then went on to load the bases in both the bottom of the fifth and the bottom of the sixth, each time with one out, but was unable to answer, while Beuregard scored one run in the sixth and one more in the seventh to pick up the 5-1 win.

Jonah Carroll got the start on the mound and tossed five innings allowing three earned runs and five hits. Noah Whatley finished the game and allowed one hit and one earned run.

Hartsfield went 2-for-4 at the plate with an RBI, while Eddy, Sam Hamner and Michael Hiers all had one hit.

Two pitches into the top of the sixth inning, the Lions finally seemed to realize they were on the brink of elimination trailing 2-1 in the second game of a best of three series.

After watching a first-pitch strike, Eddy settled into the batter’s box, took his stance and waited on the 0-1 pitch. It was the pitch he had waited for the entire game as he drove the ball deep to right field and over the wall for the game-tying home run.

While Briarwood didn’t score a run the rest of that inning, it seemed to spark the meat of the Lions’ order in the top of the seventh.

Hamner led the final inning off with a single and eventually advanced to second on a sacrifice bunt from Perrien.

It didn’t take long for Hamner to cross the plate. During the very next at bat, Hartsfield continued his stellar afternoon at the plate with an RBI-single to left field to bring the go-ahead run across the plate for the 3-2 lead.

After Hartsfield worked his way over to third, Hiers was able to tack on an insurance run when he hit a sac fly to drive Hartsfield in for the 4-2 lead.

The spark from Eddy started after Hiers was able to work out of a bases loaded jam the inning before on the mound as he went on to pick up the win for the Lions after a solid outing pitching and at the plate.

Hartsfield finished the game 2-for-4 at the plate with one RBI, while Eddy Hiers and Eli Steadman had the other two RBIs for Briarwood.

By ALEC ETHEREDGE | Sports Editor With the soccer playoffs now less than a week away for several soccer teams,... read more