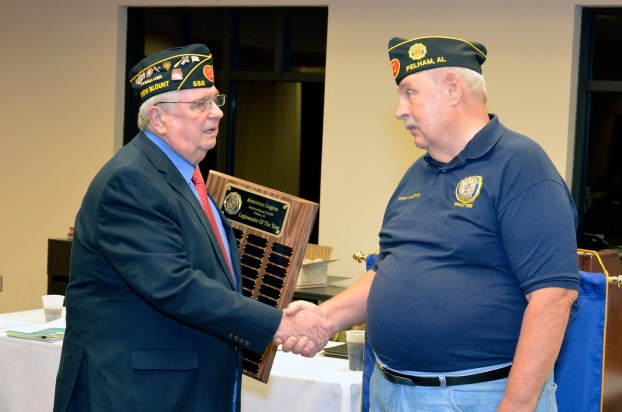 The award is given to someone who has exhibited outstanding service within the post and in the community.

As a nine-year veteran of the American Legion and a four-and-a-half-year member of Post 555, Lakotich has served in numerous capacities within the organization and volunteers his time in his community.

He has served as the post’s sergeant-at-arms and post trustee. He continues to serve as a member of the event committee, the Flag Replacement Team and the oratorical committee. He helps manage the post’s merchandise store and is the assistant to the sergeant-at-arms during post meetings.

He was named an Honorary Member of the Triple Nickel Riders in 2018 for his continued support of the Riders and their programs. This honor is awarded only once a year and is one of the most coveted awards in the American Legion organization.

Lakotich was a member of the U.S. Air Force from 1961 to 1969 during which he served in radio and television broadcasting. Frank broadcasted all over Korea and Turkey, giving support and news to U.S. troops.

At one time, North Korean put a bounty on Lakotich’s head to suppress his broadcasting efforts and pro-American commercials. After a break in service he enlisted in the U.S. Army Reserve and served in radio and television broadcast from 1982 to 1996.

Locally, Lakotich is a member of the Pelham Library Guild, Friends of Helena Public Library, Support Committee of the National Veterans Cemetery in Montevallo and the Blue Star Support Committee.

He is the fourth member of Post 555 to receive this honor. Other recipients were Ron Koonce, Kenneth Paschal and Anita Bennett.

Savor the flavor: Taste of Pelham draws more than 200 people