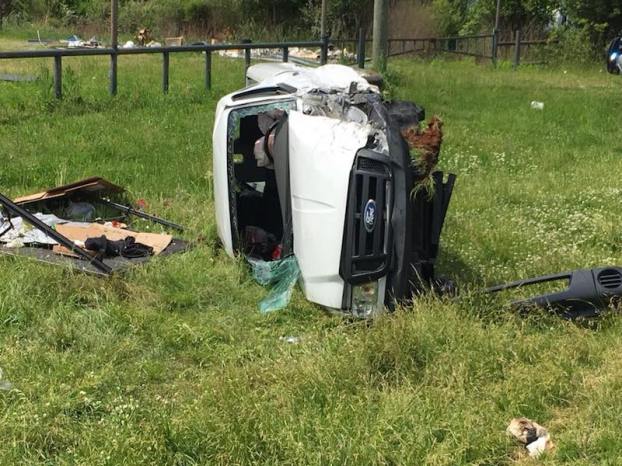 One vehicle was overturned and extensively damaged after a four-vehicle wreck that occurred on April 25 on Alabama 119. (Contributed)

ALABASTER – The Alabaster police and fire departments responded to the scene of a multi-vehicle wreck that occurred on Alabama 119, near the intersection of Meadowlark Place, on the afternoon of Wednesday, April 25.

According to the AFD, the wreck involved four vehicles. APD officer Grant Humphries said the wreck took place at around 2:30 p.m., when one vehicle struck three other vehicles, went off-road and overturned.

While one passenger was transported to a nearby hospital for minor injuries, no life-threatening injuries or deaths were reported.

The vehicle that overturned sustained an extensive amount of damage, according to Humphries, and the other three cars sustained mild impairments.

While police did not officially close roads in the nearby area, Humphries said they did re-route traffic.

Humphries said no arrests are expected to be made as the result of the collision, which is currently under investigation by the APD.

BIRMINGHAM – A Chelsea man was sentenced to 21 years in a Birmingham-based conspiracy to distribute fentanyl, heroin and cocaine... read more