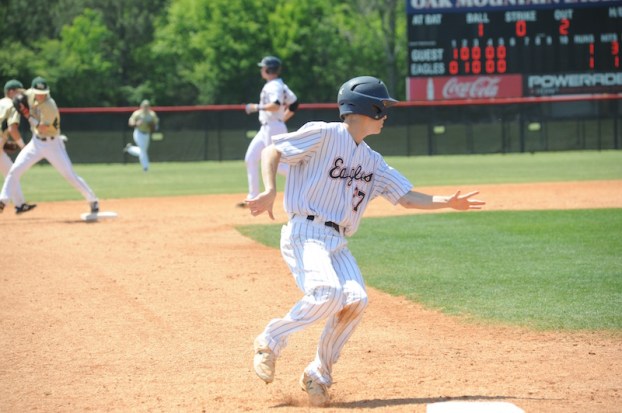 MADISON – After opening the AHSAA Class 7A baseball playoffs with a 12-3 win, Oak Mountain dropped Game 2 of its series at Bob Jones, 5-1, late Friday. The two teams will meet for a decisive Game 3 on Saturday, April 28 at 1 p.m.

The Eagles fell behind 3-0 to begin the evening, in part by a two-run home run from Mitch Daly. Oak Mountain evened the score in the fourth and then scored four in the sixth and five in the seventh to put the game away. Gene Hurst recorded the win on the mound, allowing two earned runs off four hits through six innings of work. He struck out 11 while keep Bob Jones off the board after the second inning.

“I’m really proud of how we competed. Gene did a great job in Game 1. He overcame a bumpy start and gave our offense a chance to get going and score some runs,” OMHS head coach Derek Irons said.

After a pair of singles to start the third by Caleb Ragland and Jack Kimbrell, Landon Cato homered to tie the game, 3-3. He led the team in RBIs with one swing.

Andrew Heiberger singled with one out in the sixth inning and scored the go-ahead run on an error. Oak Mountain went on to plate four unearned runs in the inning on a RBI single by Fraser and two-run double by Ragland, who led OMHS with three hits in the game. Three of the Eagles’ runs in the fifth were also unearned.

In Game 2, Wes Davis went the distance on the mound, allowing six hits and striking out six. Four of his five runs allowed were earned.

The Eagles took advantage of four walks in the bottom of the third, including a two-out walk by Hurst to take a 1-0 lead, but that was all the offense Oak Mountain could get going. The lone hit in the game was a two-out double by Hall in the second inning. Hall finished the day with three hits in the two games.

Bob Jones took the lead in the on a three-run home by Dylan Ray and added a pair of runs in the fifth. Oak Mountain loaded the bases in the sixth inning but left all runners stranded.

“We had the bases loaded a few times. If we could have had a big timely hit it could have changed the game,” Irons said. “Wes going the complete game was huge. We didn’t have to use the bullpen, and that put us in good shape for (Saturday).”

Kimbrell is slated to start the rubber match Saturday.

Chelsea girls take down Homewood in top-4 battle to advance