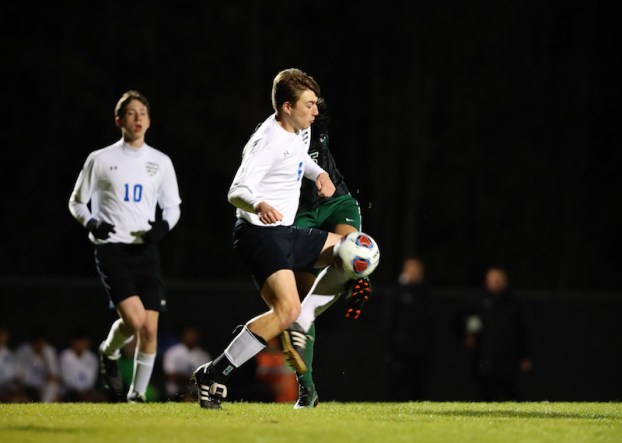 The Chelsea boys soccer team lost a difficult 2-1 game against John Carroll on Saturday, April 28, to fall in the first round of the playoffs. (For the Reporter/Cari Dean)

CHELSEA – An improved season for the Chelsea Hornets boys soccer team has come to an end after losing to 10-time state champion John Carroll 2-1 in the first round of the Class 6A playoffs at home on Saturday, April 28.

The Hornets, who had climbed up to No. 4 in the latest 6A rankings, were in the midst of an impressive season that saw them bring home the area championship over defending 6A champion Pelham.

John Carroll, who was in a down season for the most part, had started clicking down the stretch of the season winning six of its final eight games heading into the playoffs, while Chelsea had lost three of four going into the postseason.

Early in the game, that’s the way it started too. John Carroll came out and controlled the first 10 minutes of the game, but Chelsea’s goalkeeping and defense was good enough to withstand the early push from the Cavaliers.

That seemed to inspire the Hornets offense. After a couple of good looks and some strong offensive pressure, Derrian Blanding capitalized and made the Cavs pay when he connected on a shot off a corner that hit the post and bounced in for a 1-0 advantage 17 minutes into the game.

Close to 13 minutes later, John Carroll answered with an equalizer after the Hornets committed a penalty to give the Cavs an easy opportunity to tie the game at 1-1 late in the first half.

The exciting pace continued into the second half with several good looks early from both teams, but defense and goalkeeping became key again and some history was made for the Hornets in that regard.

Senior Noah Lunsford ended up breaking Chelsea’s single season record for blocked shots with 83 to cement himself as one of the school’s best ever defensive players.

Shortly after that, Joseph Gage made a key save to keep the score tied at 1-1 as the pressure-packed moments were picking up.

Just four minutes later, however, Gage was involved in a controversial decision that ended up being the difference in the game.

On a cross into the box, a John Carroll player went up to try and connect on a header, while Gage also went up to try and block the ball away. The two players then ended up colliding and a penalty was called on Gage leading to a second penalty shot in the game for the Cavs.

Chelsea head coach Lee Miller was visibly upset with the call, but with 14:56 remaining in the game, John Carroll capitalized to take a 2-1 lead.

The Hornets didn’t give up, however, and in the final minutes of the game earned three separate corner opportunities. Unfortunately for Chelsea, all three opportunities came and went without a goal being scored as the final seconds ticked off the clock.

While Chelsea will lose a few key seniors, including Blanding and Lunsford, the Hornets will return several of their best players in 2019 as they look to repeat as area champs and make deep playoff push.

Calera hangs on to advance to quarterfinals of 5A playoffs

By ALEC ETHEREDGE | Sports Editor CALERA – With one out in the bottom of the fifth inning, Calera’s Kevin... read more