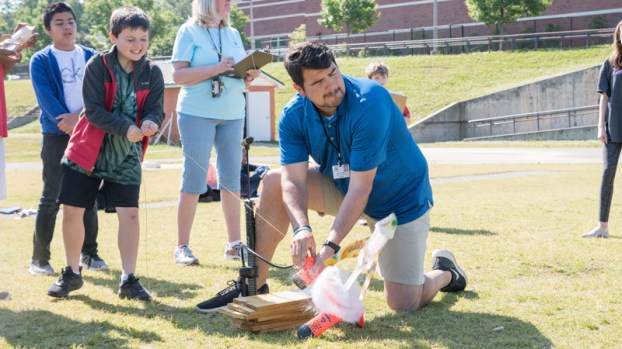 HOOVER – Cora Jones and Katie Pate used research, engineering and problem solving to build a rocket that launched 210 feet—farther than those built by about 400 other sixth grade students at Berry Middle School.

The school implemented a new rocketry program this year that included pairs of students building rockets and then launching them in a competition, teacher Chris Peterson said.

The program was brought by first-year teacher Kevin Pughsley from a previous school, Peterson said.

The first step was for students to research the history of rocketry, including NASA’s Mercury and Gemini missions, the Space Race with the Soviet Union, animals in space and presidential influence on space missions.

“That gets them intrigued about it,” Peterson said about the research phase of the program.

Students built their own rockets out of materials brought from home. The only requirement was that main body of the rocket be a 20-ounce bottle.

They also learned how NASA and private companies have evolved in their capabilities of launching rockets before heading out to the football field on April 27 for the first round of launches.

For the launch, the teachers ordered a ready-to-build launch pad kit.

On the launch days, teams took turns hooking their rockets up to the launch pad, pumping in air pressure then releasing the rockets into the air at about a 35-degree angle.

The groups then modified their rockets based on what they learned from the first launch.

For example, many teams learned that if their design called for cutting the bottle, they ended up with a water leak that derailed any hope of a high distance. Others modified their fins better flight.

The second launches were conducted on May 1, and then there were three days of debriefing—reviewing what they learned during the exercise.

Jones and Pate said the components crucial to their success were fins that gave the structure stability and a nose cone that had to be modified between the first and second launches.

“We had a lot of fails with the nose cones,” Jones said.

Still, they did not know how the rocket—nicknamed “The Unicorn”—would perform.

“I was surprised when it went 154 feet on the first one,” Pate said.

Students’ rockets had to travel 100 feet in order for them to receive the full 20 points on the launch assignment, Peterson said, and about 70 percent of the teams reached that benchmark.