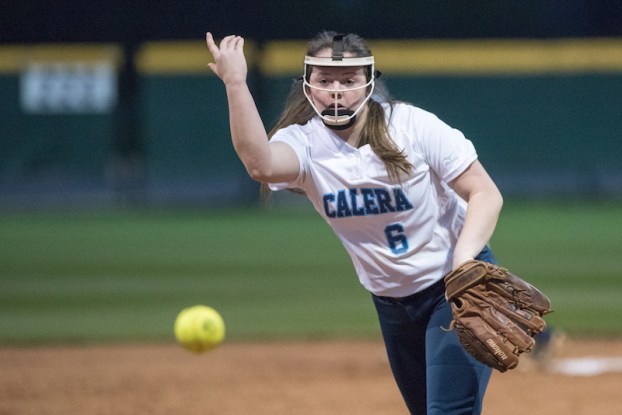 Calera's Ashlynn Hamm, above, had impressive performances both at the plate and in the circle for the Eagles during a run to the area championship. (File)

CALERA – With two consecutive wins against the Jemison Panthers by a combined three runs, the Calera Eagles won the 2018 Class 5A, Area 6 Championship on Tuesday, May 1, in front of a home crowd.

It was an exciting day for the Eagles, who were forced to come from behind in both games, before eventually taking down Jemison in each contest, including a nine-inning thriller to start the tournament.

With the title, Calera advanced to the Regional tournament which will be held in Troy starting Thursday, May 10. A recap from their championship run is below.

Jemison stormed out to a two-run lead in the first inning of Calera’s opening game in the tournament, before the Eagles scored two unanswered to tie the game in the middle innings.

A leadoff walk to Ashlynn Hamm put the game-winning run on first with no outs in the inning. Emma Harrison came in to replace Hamm as a courtesy runner and moved into scoring position with a passed ball.

Now, with the best chance either team had in extra innings, Meaghan Marfice stepped to the plate looking for the heroic hit. In a 2-2 count, Marfice hit a hard ground ball that got through to right field and allowed Harrison to round third and come home for the walk-off win.

After giving up the two runs in the first inning of the game, Hamm became unstoppable in the circle. She went on to allow just six hits the rest of the way and held Jemison scoreless for nine innings of play in clutch situations. She finished the game allowing a total of nine hits and two earned runs while striking out nine and allowing no walks.

Her pitching effort gave the Eagles a chance to comeback despite the early deficit, and they took advantage.

Calera chipped away at the Panthers’ lead in the bottom of the third. After an error and a single put Bri Plocharczyk and Charley Clark on base, Hamm came through to help herself out with a single to center field that scored Plocharczyk to bring the Eagles within a run.

Two innings later in the bottom of the fifth, Plocharczyk and Hamm came through again. With one out, Plocharczyk walked to put the game-tying run aboard before a strike out put two down in the inning.

That score remained until Marfice’s walk-off single in the ninth to advance the Eagles to the championship in the winner’s bracket.

Clark went 2-for-4 at the plate for Calera, while Hamm, Marfice and Lauren Smith all had one hit. Hamm and Marfice had the team’s only RBIs.

Calera, now one win away, found itself down again early again in game two thanks to Jemison taking a 1-0 lead in the top of the second thanks to a fielding error.

But like they did in game one, the Eagles responded in a big way.

Still trailing 1-0 in the bottom of the second, Calera put together a two-out rally that ended up winning the area championship.

Michaela Landrum led the inning off with a double before two consecutive outs were recorded.

With Landrum now on third, the Eagles had two of their biggest offensive threats coming to the plate next. Clark started the rally when she singled to center field on a ground ball up the middle that scored Landrum for the game-tying run.

Hamm then stepped to the plate looking to give Calera its first lead of the game. After Clark stole second, and in an 0-2 count, Hamm came through with a fly ball to center field that fell for a double to bring in the go-ahead run.

Two batters later, Hamm was able to advance to third on a wild pitch before an error allowed her to score to put an insurance run on the board for the Eagles.

Smith took advantage of that lead in the circle as she allowed just one base runner over the final four innings getting Jemison to go down in order in three different innings.

That strong offensive outburst in the third inning as well as Smith’s pitching performance led to Calera clinching the area championship.

Smith pitched a complete game and allowed five hits and one unearned run while striking out five.

Clark, Hamm, Nicole Harrelson, Landrum and Madison White all had hits in the game, while Harrelson also added two walks.

By ALEC ETHEREDGE | Sports Editor CULLMAN – In just its second year with a golf team, the Vincent Yellow... read more