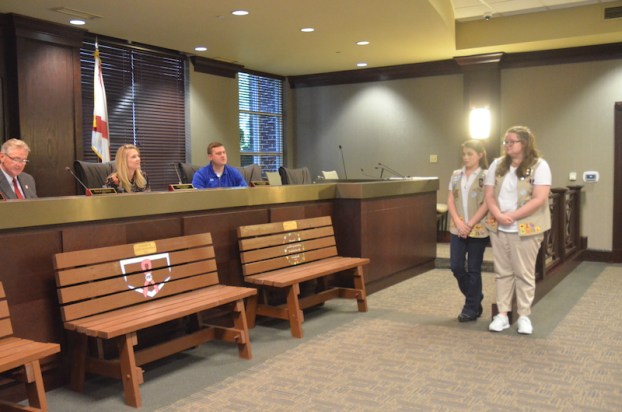 Girl Scouts Madison Bearden and Millie Johnson were commended by the city for receiving their Gold Awards through community service projects during a May 1 council meeting. (Reporter photo/Amalia Kortright)

CHELSEA– Two members of Ambassador Girl Scout Troup 175 were recognized by the city of Chelsea for completing their Gold Award projects at a regularly scheduled council meeting on Tuesday, May 1.

Chelsea High School student Madison Bearden and Essential Church School student Millie Johnson each received a city pin and were commended for their projects, which focused on mental health awareness and benefitted the Chelsea Historical Society.

From Feb. 5-9, Bearden organized Mental Health Awareness Week at ChHS, which was concluded with a mental health fair. She said the idea came after she noticed how many people in the community have been diagnosed with a mental illness.

“I noticed a lack of mental health education in our community and our schools,” Bearden said.

For her project, Johnson said she gathered 100s of photos from the community, scanned them and copied information about them. Scanned copies of the photos will be on file at the Chelsea Museum, and the original copies were returned to their owners.

To help her project along, Johnson said she recruited volunteers at community events and held training sessions at the Chelsea Public Library.

Mayor Tony Picklesimer said receiving a Gold Award is the highest honor a Girl Scout can receive and commended Bearden and Johnson for their efforts.

“Both Madison and Millie have been Girl Scouts for 13 years, and they’re very active in their community,” Picklesimer said

By GRAHAM BROOKS / Staff Writer HELENA–The 2018 senior class of Helena High School will formally be recognized at a... read more