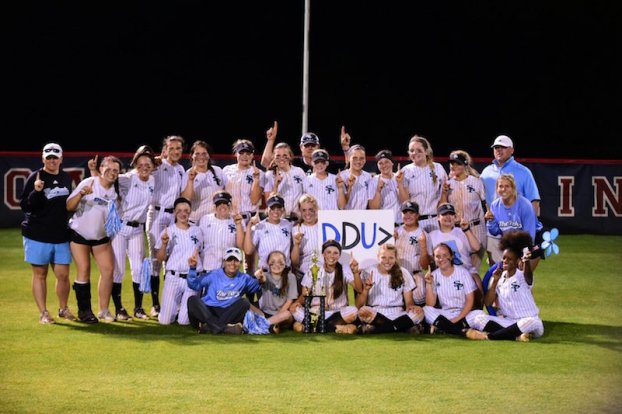 NORTH SHELBY – For the sixth time this season, the Spain Park Jaguars and Oak Mountain Eagles met on the softball field, this time for the area tournament championship on Wednesday, May 2, at Oak Mountain High School.

After playing five one-run games this season, Spain Park was able to pull off the largest margin of victory by either team this season–a whopping two runs–as the Jags took down Oak Mountain by a final score of 11-9 for the area tournament championship.

It took some bitterness out of the fact that the Eagles had won the regular season area championship thanks to a coin flip, which earned Oak Mountain the right to host the area tournament.

After beating Mountain Brook 14-2 to kick off the area tournament, Spain Park squared off with the Eagles for the first of three matchups in the tourney, but went on to fall by a final of 4-3 thanks to a three-run third inning by OMHS.

The loss dropped the Jaguars into the loser’s bracket where they beat the Spartans 10-0 to at least lock up a berth in the Regional tournament in Tuscaloosa starting on Thursday, May 10.

Spain Park had bigger goals of still winning the area tournament championship, however. Thanks to losing to the Eagles earlier in the tournament, the Jags were forced to win two consecutive games to do so, while Oak Mountain needed just one win to lock up the title.

Despite taking a 6-1 lead midway through game one, Spain Park had to hold on down the stretch to win by a final of 7-6 thanks to Oak Mountain scoring five runs in the top of the sixth inning.

With the game tied 6-6 in the bottom of the sixth inning, Alexis Anderson blasted a leadoff solo home run to put the Jags on top 7-6 heading to the final inning. Annabelle Widra then went on to get out of a bases-loaded jam that could have won the game for the Eagles in the bottom half of the inning thanks to a pop out.

The win led to a winner-take-all game directly after for the area tournament championship between the two teams that had battled to five four-run games during the season.

Caroline Wooley, Kate Campbell, Taylor Harrington and Caroline Frederick all had singles in the five-run first inning, while Maddie Majors added a double and three walks were recorded.

Oak Mountain cut into the lead with two runs in the bottom half of the inning thanks to singles from Abi Brown and Jenna Galloway, both of who scored on an error later in the inning.

Leading 5-2 Spain Park busted the game open in the top of the second with six more runs. Two walks to Bailey Bowers and Lindsey Parker put two runners on base for Wooley, who bombed a ball over the right field wall for a three-run shot to give the Jags an 8-2 lead.

Harrington and Campbell added two more singles shortly after before Majors doubled in both of those runners as well. After an Annabelle Widra walk brought Bowers back to the plate, the Jags had successfully batted through the order.

Bowers proceeded to bring home the sixth and final run of the inning for the Jaguars with an RBI single to left field.

Oak Mountain began chipping away at the lead a few innings later. It started in the bottom of the fourth with a two-run homer from Torie Denkers to make the score 11-6 and saw two more runs an inning later thanks to two runs being walked in.

In the bottom of the sixth, Oak Mountain was able to draw to within two runs after Brown blasted a three-run homer over the left field wall to cut the deficit to 11-9 at the end of the sixth.

Spain Park went down in order in the top of the seventh as the offense had gone stagnant for five consecutive innings after the 11-run start.

After walking Denkers to start the bottom of the inning, Widra was able to get two fly outs during the next two batters down and two outs on the board.

Widra then went on to strike out the final batter of the game, which sent gloves and equipment flying through the air in celebration as the players stormed the field in celebration after claiming the championship.

Majors went 3-for-4 with three RBIs in the game to lead Spain Park, while Harrington went 4-for-5 with one RBI. Campbell was 3-for-5 at the plate with two RBIs, while Wooley added three RBIs on a 1-for-4 game at the plate. Bowers was the final player with multiple hits going 2-for-4 with an RBI.

While both teams will advance to Regionals after finishing as the top two teams in the area tournament, Spain Park will get the higher seed when they travel to Tuscaloosa on May 2.

By ALEC ETHEREDGE | Sports Editor MOODY – After losing two games in a row to area foe Moody during... read more