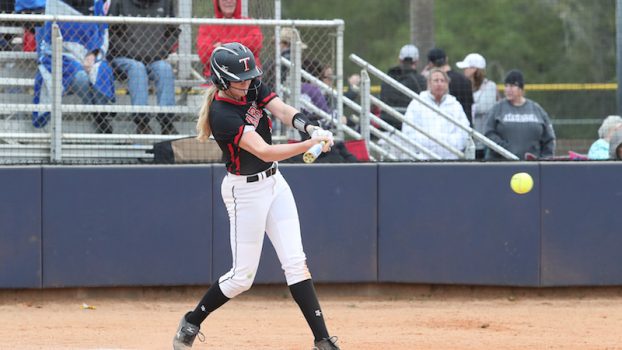 The Thompson softball team has advanced to the North Central Regional tournament after finishing second to Tuscaloosa County in the area tournament. (File)

TUSCALOOSA – The Thompson Warriors’ softball team, who has yet to lose 10 games in 50 played, is in the midst of an incredible season under second-year head coach Kevin Todd, and it’s a season that will last a little longer in 2018 thanks to the Warriors finishing second in the area tournament held at Tuscaloosa County High School Wednesday, May 2, through Thursday, May 3, to clinch a spot at Regionals.

With it being a four-team bracket and double elimination, the Warriors needed two wins to advance and were halfway there after a 5-1 victory against the Hoover Buccaneers in the first game of the tournament to advance in the winner’s bracket.

A win in the next game would’ve locked up a spot in Regionals, but THS gave up three runs in the bottom of the seventh to lose 10-9 on a walk off that forced the Warriors into the loser’s bracket.

Now on the brink of extinction, Thompson squared off against Vestavia Hills looking to not only advance to the area tournament championship, but the next round of the playoffs as well.

The Warriors were able to score at least one run in the first five innings of the game to accumulate their game total of eight, which was enough to grab an 8-2 win to keep their season alive.

Thompson’s eight-run outburst started in the top of the first inning when Kennedy Foote doubled to center field to drive in both Lauren Haskins and Ayanna gamble for a quick 2-0 lead.

One inning later, the Warriors added to that lead with an RBI-single from Kindall DeRamus, who singled on a ground ball up the middle to score Taylor Cordova as they had gathered a three-run advantage.

It became a key run for advantage purposes, as the Rebels singled to start the bottom of the second and then got a two-run home run during the next at bat. The run in the previous inning for Thompson was able to keep the team in front by a run.

The Warriors took advantage of had their biggest inning of the game in the third.

It started with a leadoff single from Madison Bubel and was followed by a double from Foote to put two runners in scoring position with no outs. Two batters later, Madison Plunkett singled to left field to bring in Gamble, who was put in as a courtesy runner.

During the next at bat, Plunkett stole second to immediately put two runners back in scoring position, and Cordova capitalized at the plate with a double to left field that cleared the bases for a 6-2 Thompson lead at the end of three innings.

Thompson had 14 hits in the game, six of which were doubles.

Foote went 3-for-3 at the plate with one walk, two RBIs and two runs scored. Haskins also had three hits thanks to a 3-for-5 game with one RBI and one run scored. Cordova ended the game with a 2-for-2 performance including two RBIs, while Plunkett went 2-for-4 with two RBIs as well.

Whitfield got a complete-game win in the circle and allowed eight hits and two runs while striking out two.

With the win, Thompson advanced to take on Tuscaloosa County again, but needed two wins to take home the tournament championship, while the Wildcats needed just one win.

Despite a strong comeback effort to get within a run in the fifth inning, Tuscaloosa County scored nine unanswered runs in the bottom half of the fifth and sixth innings to take home the area tournament crown with a 15-5 victory.

Thompson had still accomplished the main goal of advancing to Regionals, which puts the Warriors two wins away from a spot in the state tournament.

The Warriors will be competing in the North Central Regional, which is one of the more difficult to qualify for the state tournament from as it features Tuscaloosa County, Thompson, Spain Park and Oak Mountain, all four of which have been ranked inside the Class 7A top 10 throughout the season.