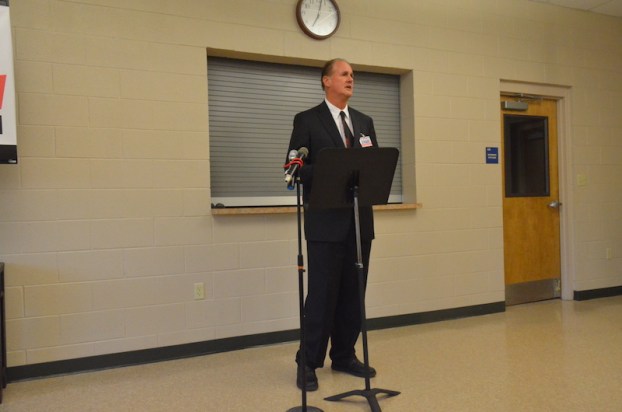 CHELSEA – Many candidates who are running in the county’s primary election on Tuesday, June 5 spoke about their platforms at the Shelby County Election Forum on Tuesday, May 8.

The forum was hosted by local radio station Kool 96.9 FM and took place at 6 p.m. at the Earl S. Niven Community Center in Chelsea. A total of 18 candidates participated, and each candidate was given three minutes to speak.

“It’s great for Shelby County that there are so many candidates out there,” Kool 96.9 FM show host Paul DeMarco said. “Because of that, we thought the best way to do it so that the community could at least get an introduction to all the candidates that will be on the ballot on June 5 is have each candidate come tonight and speak for a few minutes.

The first candidate to speak, Shelby County Circuit Judge contender Phillip Bahakel, began his presentation by stating that he was not a “real politician,” and previously worked as a judge on top of being a single father to a child with special needs and a typical child.

“I bring to the bench with me those experiences, those life traits. When you have a judge on the bench, those are the things that you should rely on,” Bahakel said.

Shelby County Board of Education Place One incumbent Jimmy Bice said he has dedicated his life and career to the county’s educational system.

“I have the experience to make the new curriculum integrate with the present curriculum,” Bice said. “I’ve been a part of the team that’s put Shelby County Schools on top and I’d like to continue to keep them there and make the best better.”

SCBOE Place Two incumbent David Bobo began his presentation by stating that while Shelby County Schools is the state’s top school system, his goal is for local schools to strive for continuous improvement.

“The thing that really sets me apart is it’s not really a calling. I hear people say it’s a calling. It’s not a calling, it’s a doing for me. I do it every day,” Bobo said. “I’ve found a passion for this, and I really want to continue it.”

“I was appointed as a special probate judge by Judge (Hewitt L. “Sonny”) Conwill, which allowed me to actually serve as a probate judge in Judge Fuhrmeister’s office,” Boyd said. “In that role, I was able to hear over 150 adoption cases, 150 commitment cases, as well as cases involving wills and estates.”

Shelby County Circuit Clerk candidate Sharon Cooper said she is a Christian, conservative, lifelong resident of Shelby County who is a 30-year employee of the clerk’s office.

“I have supervised every division of court: civil division, family court, criminal division, and I am not a career politician. I am for term limits,” Cooper said. “I have over 30 years of hands-on experience to be the circuit clerk.”

Incumbent Shelby County Coroner Lina Evans said she is the only fellow, which is the highest ranking of the American Board of Medicolegal Death Investigators, in the state.

“I believe that to do the role of the coroner, which is determine the cause and manner of death, you need an education in medicine and in forensics. If you’re not doing this, you’re not doing your job competently,” Evans said.

SCBOE Place One candidate Bragan Feldman said she is a product of Shelby County Schools, has taken leadership positions in numerous local organizations throughout the years and has worked as a substitute teacher.

“With our students, I do not want their promise of opportunity to remain unfulfilled. Whether it’s technology, programs or facilities, it’s our responsibility to give them every chance to succeed,” Feldman said.

Incumbent Shelby County Circuit Clerk Mary Harris said she has held her position since 1999. Prior to that, Harris said she began working in the circuit clerk’s office in 1972.

“I humbly ask for your support, and ask that you vote for the clerk that has a proven record of service,” Harris said.

SCBOE Place One candidate Courtney Kalnoske said she is a 14-year resident of Shelby County and is currently a stay-at-home mother, a substitute teacher and is the Mt Laurel Elementary School PTO President.

“It is with no pretense when I say that our schools are where my heart truly is,” Kalnoske said. “You’re far more likely to see me inside the schools on any given day than outside the schools. As a parent, a substitute and a PTO leader, I feel like I have a uniquely well-rounded perspective on our schools.”

Shelby County Circuit Judge candidate Nicole Saia said she has 16 years of experience as a trial attorney and a resident of Chelsea since 2005. She said the job of a circuit judge is to hear a wide range of cases.

“I have tried all those cases. I haven’t just represented clients, I have brought them to court, I have been with them and I have been through the trial process. I think that’s very important and a valuable experience to bring to the judge’s office,” Saia said.

“We’re blessed with outstanding men and women that have bought into the philosophy that citizens are consumers and we are service providers,” Samaniego said. “We’ve made an effort to engage with every citizen in the county in every community.”

SCBOE Superintendent candidate Kristi Sayers said she does not identify as a politician, but as an educator of 29 years. She said she believes a partnership between schools, parents and the community will help the school system improve.

“As an attorney, my greatest pleasure was doing adoptions. The probate judge gets to do adoptions,” Starnes said. “I want to make happy children, happy parents and happy grandparents.”

Shelby County Probate Judge candidate Stella Tipton said she is running for probate judge to protect the rights of residents. She said she has been practicing law for almost 33 years and has experience with the probate court.

Shelby County Coroner candidate David Warren said he currently serves as a sergeant with the SCSO and supervises security at the Shelby County Courthouse. He said he has 20 years of experience with death scenes.

“My background, I believe has prepared me for this job. It does not take a forensic background in order to do the job of coroner. It does take a lot of investigative knowledge and understanding,” Warren said.

The last candidate to speak, Alabama House of Representatives District 45 candidate, said he served as a Shelby County Commissioner from 1996 to 2008. He said one of his main concerns are the financial issues facing the sewer systems in Jefferson and Shelby Counties.

“When you destroy the economic vitality of a function that is important to society, you endanger that society,” Crockett said. “On the Shelby County issue, it’s a corporate system. To reduce those rates, I advocate for the use of the Trump tax credit, which on Jan. 1 of 2018, reduced corporate taxes from 35 to 21 percent.”

Following the forum, a reception was held to allow voters to ask questions and express their concerns to the candidates.