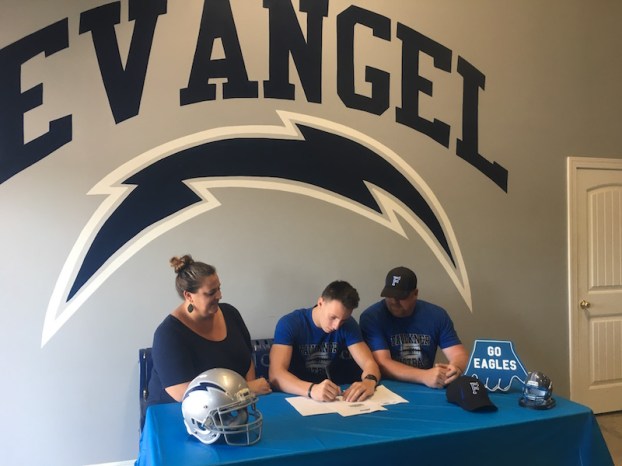 ALABASTER – Thursday, May 10, marked a special day for one of Evangel Christian School’s senior athletes, as he signed a scholarship to continue playing the sport of football at the next level.

Surrounded by his parents on each side of him with the Evangel Lightning logo above his head, a place that helped turn him into a standout athlete and young man, Coleby Henderson signed to continue playing the sport of football at Faulkner University.

“I had the pleasure of coaching Coleby for his senior season,” head football coach and athletic director Tim Smith said. “His work ethic is second to none.”

He went on to lead the county during the 2017 football season with six interceptions, two of which he returned for touchdowns.

“He will definitely be a plus for Faulkner and head coach Shane Wasden,” Smith said. “Evangel and I are so proud of Coleby and this accomplishment.”

Henderson’s leadership is one reason he is successful and it’s not a vocal leadership but a lead by example kind of leadership. He’s the kind of player that goes to practice every day and works hard to get the job done, which sets an example for others that if they do the same thing then they’ll be successful as well.

“He is one of those quiet leaders,” Smith said. “Never says a word, just does his job at a very high level.”

Henderson’s work ethic and leadership on the field were big reasons why the Lightning were able to go on and win the ACSC State Championship game in 2017.

An athlete that can clearly play all over the field, Henderson will be a welcome sight for Faulkner during the 2018 season.