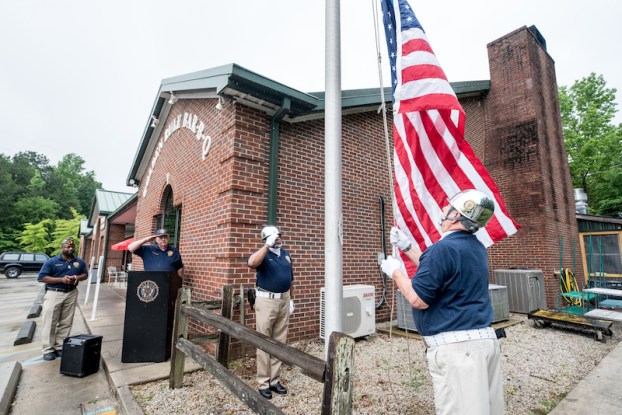 HELENA–The Golden Rule BBQ restaurant in Helena is flying a brand new American flag just in time for the Memorial Day holiday thanks to the help of the American Legion Matthew Blount Post 555 based in Pelham.

Restaurant staff and dozens of Legion members gathered around the flagpole the morning of Tuesday, May 22, to witness a special flag replacement ceremony.

Despite the rainy conditions, the ceremony was a success and included the playing of the National Anthem, bugle calls and the proper retirement of the colors. This marked the first flag replacement ceremony in the city of Helena by the Triple Nickel Flag team.

The point of the ceremony was to replace the original torn and tattered flag at Golden Rule BBQ with a new flag, thanks to the flag replacement program through the Legion.

The American Legion Flag Reward Program exists to allow post members, friends, neighbors, local schools and businesses that choose to sponsor Post 555 the opportunity to buy their flags from the American Legion. When a school or business contacts Post 555 to conduct a flag replacement ceremony the post will provide the requestor the appropriate sized American made flag.

Golden Rule BBQ Manager Jessica Gould said she and her team took over management of the restaurant at the end of January, and not long after she knew she wanted to have the flag replaced.

“We reached out to the American Legion and they were able to provide the flag and do the ceremony,” Gould said. “We decided to have the ceremony right before Memorial Day and I think we owe it to all the veterans to have a new flag to display. The ceremony was amazing, and it just gave me chills up my spine. As a community, I think we should support our veterans and I really appreciate the veterans for coming out and doing the ceremony for us.”

Post 555 does request that a requestor for a new flag make a donation to the post to at least cover the cost of the selected flag provided.

For more information about the American Legion Flag Reward Program, contact the Legion at alpost555.com/honor-guard or the flag team coordinator Ron McGriff at FlagDetail@alpost555.com.

By NEAL WAGNER / Managing Editor ALABASTER – As someone who has hired countless employees during his 40-year career in... read more