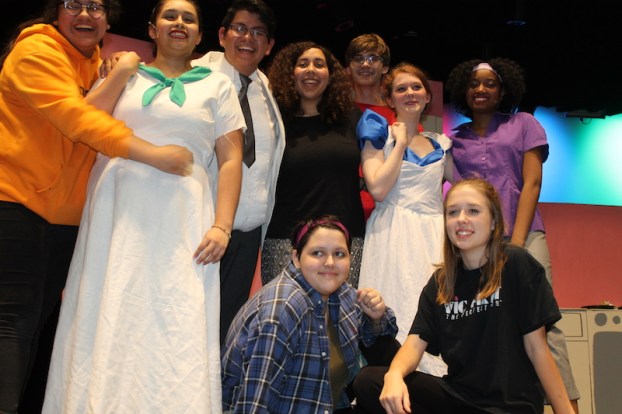 “Yeah, I’ve had this play in my head and I’m finally getting it down on paper,” Finley shared.

That play in Finley’s head took the stage last week as a senior-directed one act. Complete with an ensemble cast, this tale of a husband and wife with vastly differing experiences of their reality was a wonderful combination of wit, insight and delight.

“The cast and crew were amazing to work with and Isabella is so easy to work with,” said Makenzie Rollins. Rollins played the couple’s dog walker and the husband’s eventual love interest.

“I’m so impressed by Elise Hansen’s artistry,” said Finley. “She took my sketches and made incredibly realistic backdrops.”

Hansen’s artistry included building an authentic kitchen and repurposing props from the spring musical. Louie Smith worked with Hansen to create the set.

Juniors Hailey Watson and Jared Franco portrayed the married couple and Lupita Aguilar became an angelic emissary. Ultimately, a wife bent on having her interpretation of best practice followed in every detail prevailed—as the stubborn often do. Convinced of her superior viewpoint, she emerged victorious in her own eyes—despite her demise.

“I loved every part of this experience,” said Finley. In program notes, she thanks her parents, teacher and friends.

After college, Finley plans to teach elementary school in a district unable to afford the arts. She hopes to offer students free, afterschool music classes. Finley, who once played Cinderella’s fairy godmother, will continue converting wishes into reality. Intellectual, director and fairy godmother, Isabella Finley plans to attend the University of Montevallo.