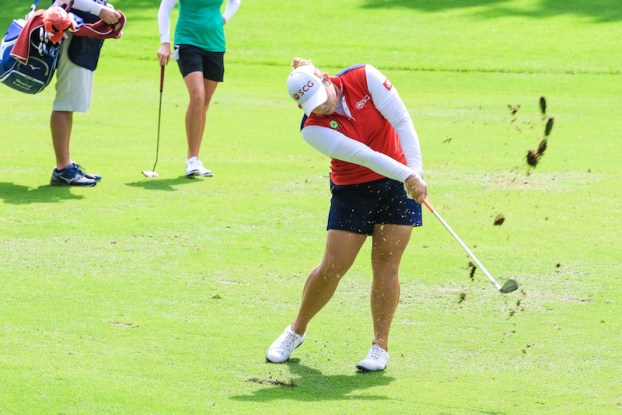 Ariya Jutanugarn highlighted the players having to resume their second round this morning. She is currently in solo second and trails Sarah Jane Smith by threes strokes. (For the Reporter/Dawn Harrison)

Round 2 of U.S. Women’s Open in the books, round 3 to kick off soon

NORTH SHELBY – A delayed Round 2 of the U.S. Women’s Open due to thunderstorms late on Saturday, forced 78 golfers to finish their second rounds on the morning of Saturday, June 2, before the cut was made and the third round begins.

At the conclusion of the second round, a total of 63 players made the cut and will continue to vie for the 2018 U.S. Open at Shoal Creek Golf Club.

While Sarah Jane Smith dominated the talk on Friday due to her second-round 67 to get to 10-under par, Ariya Jutanugarn looked to steal some of that thunder away Saturday morning.

At the beginning of the day, Jutanugarn was 6-under par through eight holes. She came out and got off to a fast start with birdies at 10 and 11 to get to 8-under par and within two shots of Smith’s lead.

“Those two holes were the highlight for me today, to make birdie on 10 and then a long birdie putt on 11,” Jutanugarn said. “The course wasn’t much different this morning. It was a little bit more wet, but the greens are still in great shape.”

She did, however, give one stroke back on the par-4 14th, before paring her final four holes to finish the day at 7-under par and three off the lead. Jutanugarn will join Smith and Su-Hyon Oh in the final group to tee off on Saturday afternoon.

“I’m not really thinking about my position, but I’m happy about my game,” she said. “I’ve been working on a lot of things and improving every day.”

Behind Jutanugarn were very few other players in contention as only four players in the top 19 were part of the draw that had to finish their round on Saturday morning.

Michelle Wie was one of those four players and she sits in the thick of things in a tie for fourth place at 3-under par. Aside from Jutanugarn, she was the closest of the players to the lead that had to resume their round on Saturday morning, which was delayed by an additional hour than originally planned.

“I was glad we did start an hour later,” Wie said with a laugh. “I woke up, checked my phone and went right back to sleep.”

While Wie is seven shots behind the leader, she still hopes to put the pressure on this afternoon after a quick break.

“I wish I had made a couple more birdies today, but at the same time, I grinded it out and made a lot of good par putts,” she said. “I’m really happy about the position I’m in and hopefully the next two days I’ll give myself some more birdie chances and make some things happen.”

Wie is part of seven other players at 3-under par, that will all look to jump up the leaderboard on moving day at the U.S. Women’s Open.

Other players at that mark include world No. 1 Inbee Park and amateur Linn Grant, as well as Chella Choi, Jenny Shin, Sei Young Kim, Carlota Ciganda and Jihyun Kim.

Heading into the third round, a total of 19 sit under par, but only two are within four shots of the lead right now. Lexi Thompson, a popular name and world No. 3, got it to 2-under par early in the resumption of her second round, but fell off late and is currently 2-over par for the tournament.

The third round will kick off around 12:45 p.m. this afternoon with players teeing off on No. 1 and No. 10 in groups of three.