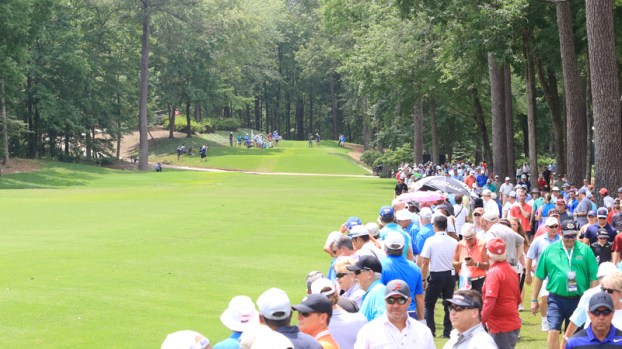 Fans enjoy the U.S. Women’s Open at Shoal Creek. (FOR THE REPORTER/DAWN HARRISON)

NORTH SHELBY – A championship venue and community support combined to create a successful golf tournament as the U.S. Women’s Open was held for the first time in Alabama, at Shoal Creek.

Dent said the course presented a fair test for the competitors and called local support of the tournament “unbelievable,” including that a new corporate hospitality sales record had been set.

And Dent added that USGA officials were impressed after working with Shelby County officials.

“I think we’ve overdelivered on all three (of the factors behind Shoal Creek’s selection),” Dent said.

Initial conversations with the USGA began about four years ago, and officials have been working in earnest for about three years to prepare the venue.

The Shoal Creek membership has been important to the effort, and a team of about 1,000 volunteers help with a variety of tasks.

Eddie Miller said he has been a Shoal Creek member since 1978—the course was founded just a year earlier—and attended the tournament with his wife, Gayle.

“I think it’s great to give it the exposure, not just for Shoal Creek but for Birmingham,” Miller said about Shoal Creek hosting the tournament. “On Sunday, there will be millions of people around the world watching, and we want to have a very positive image.”

Spectators from around the world also traveled to Shoal Creek to watch the tournament.

Maggie Porter began playing golf competitively about two years ago and said she was glad to have an opportunity to see the professionals compete.

“They seem very even-keeled,” she said.

“That’s been good for us to see, that the pros sometimes hit bad shots too,” Ryan Porter said.

The group said they had been to several U.S. Women’s Open tournaments and enjoyed Shoal Creek.

“We just wish the weather had been better,” Lippert said.

Mary and Terrell Holder visited from Louisville, Kentucky and had never been to Shoal Creek before.

“They’re doing a nice job,” Terrell Holder said. “The organization is good. There has been so much rain, but the course has drained well. And it’s very spectator friendly.”

By ALEC ETHEREDGE | Sports Editor  NORTH SHELBY – Despite losing a seven shot lead on the back nine, Thailand’s... read more