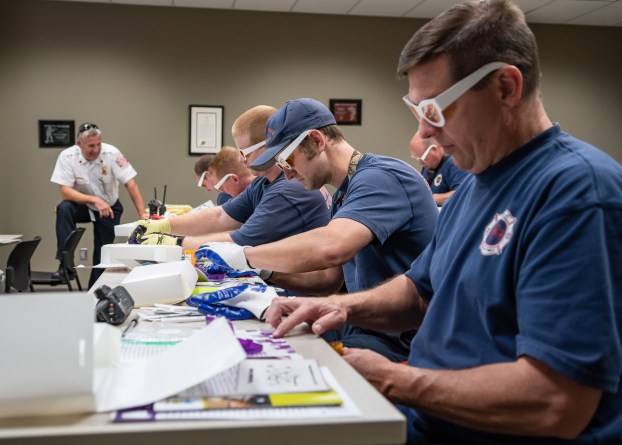 PELHAM – On Thursday, May 31, the Pelham Fire Department became the first fire department in the state to become designated as “dementia friendly” by the Middle Alabama Area Agency on Aging (M4A).

The Dementia Friendly Training Program is available statewide to first responder agencies and teaches them what dementia and Alzheimer’s diseases are, how to be sensitive to those dealing with it and their caregivers and how to respond appropriately to situations to get the best outcomes.

Robyn James, M4A marketing director and leader of the dementia training team, said M4A has trained more than 400 first responders so far and most of those have been in Shelby County.  A total of 68 firefighters completed the 2-hour course and received certificates of completion.

“This is a part of a movement for people to be knowledgeable, sensitive and responsive,” James said.

A part of the training also included allowing to firefighters to use aging sensitivity kits. The firefighters had to complete simple tasks while earing tinted glasses and thick gloves so they can see how difficult it can be for people who are aging.

“It really teaches them to be sensitive to people who are aging,” James said. “They really get a lot out of that part of the course.”

Various scenarios were given to help the firefighters recognize when a person might have dementia.

“We also give them resources for families and it’s been well-received so far,” James said. “Shelby County has really taken the lead to ensure that everyone is trained. The Pelham Police Chief sat in on the training and now he is working to schedule their training.”