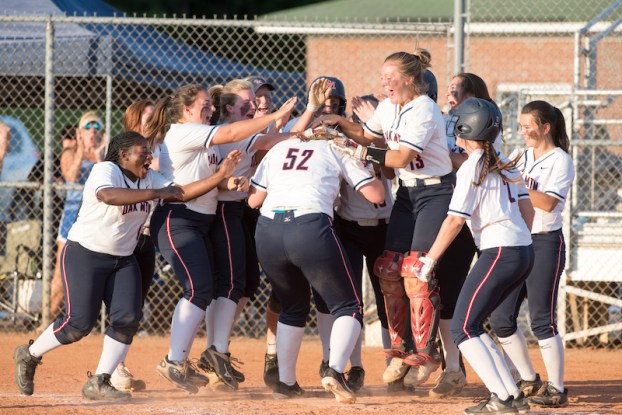 Oak Mountain's Kaitlin Griffin got her team to play with a lot of passion and excitement with no quit this year, which led to her being named the Shelby County Coach of the Year. (Reporter photo/Keith McCoy)

NORTH SHELBY – It doesn’t take winning a championship, or winning the most games to be named coach of the year, it instead takes a love for the game and putting forth hard work to make sure that your team plays as hard as they possibly can for you.

Oak Mountain’s Kaitlin Griffin exemplified the highest of qualities this season in leading the Eagles, and it showed off with the emotion the team poured into every single game.

While she also won a lot of games this season as a head coach, she got her team to play with more passion and emotion than almost every other team in the state. During each pitch, each at bat and at the end of each win or loss, you could just feel the desire to be the best leaking off the field and into your own heart.

That appetite for wanting to be the best they could be, led the Eagles to their first trip to Montgomery and the state tournament in 15 years, and it’s why Griffin has been named the 2018 Shelby County Coach of the Year.

Oak Mountain, who had a losing record just four years ago, was able to finish the 2018 softball season with an overall record of 28-17 to finish 11 games above .500.

That was just the tip of the iceberg, however, as the Eagles had several incredible accomplishments this season.

The start of the season was a sign of things to come as Oak Mountain sprinted out to a 12-2 record through 14 games, including an early win against rival Spain Park in the Jaguar Classic, as well as an early win against county-foe and 6A state championship contender Chelsea.

The Eagles hit a stretch where they lost eight of their next 12 games, but how they responded to close out the regular season is part of the reason Griffin is this year’s coach of the year.

Her team picked right back up where it started the season over the next couple of weeks, which gave them all of the confidence in the world heading into area play, where it looked to be a two-horse race between the Eagles and the Jaguars for the regular-season title.

While they lost a tough 3-2 battle in the first area matchup between the two teams, the Eagles, who didn’t lose another area game, responded in the second area matchup with a gutsy 1-0 win thanks to a complete-game shutout from Lacy Marty and a walk-off home run from Torie Denkers.

That night was a special one for the Eagles, as emotions ran high and boiled over when they won a coin toss for the regular-season area championship, which gave them the right to host the area tournament.

While Spain Park went on to win the area tournament with wins of 7-6 and 11-9, it’s how the Eagles responded to those losses that showed their fight and determination.

As the runner-up in the area tournament, Oak Mountain still advanced to the regional tournament, which is all that mattered in the grand scheme of things.

In the regional tournament, the Eagles bounced back yet again with two big wins, taking down Tuscaloosa County 13-7 and a very good Thompson team 7-6, to sweep the tournament and win the regional championship, which set them up with a spot in the state tournament for the first time in 15 years.

Tears were shed after that heart throbbing win against the Warriors to clinch a spot at state, because while they hadn’t won a state championship, it sure felt like it.

Oak Mountain went on to drop two heartbreaking games in the state tournament by finals of 8-5 and 6-4, but this team made history and will remember that for the rest of their lives.

While everybody wants the big trophy and to be called a state champion, it’s not always about that. It’s about setting the standard for the future. For years to come, younger players will remember this team and what they accomplished, and hope to

It’s for that reason, that Griffin was named this year’s coach of the year. She got this team to believe, and while they were the reason for a lot of the team’s success, the ability to get the team focused after heartbreaking losses in the biggest of circumstances was second to none.