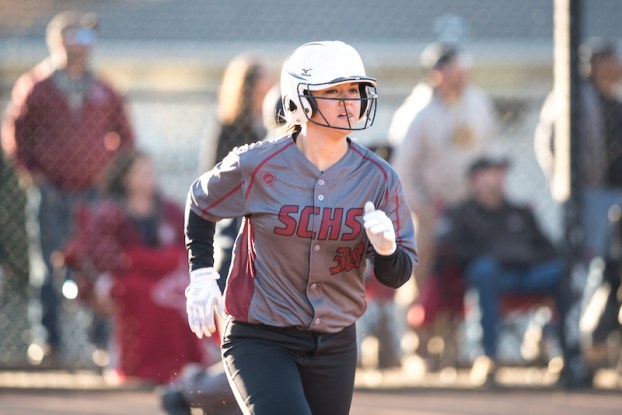 Peri Clark, above, led the county in home runs this season and was named to the All-County First Team for her efforts. (File)

A spectacular softball season has come to a close in Shelby County, but not before three teams made a run to the state tournament and several others advanced deep into regionals.

With 20 players in the county holding a batting average of .400 or greater and six batting at .500 or better on the offensive side of things and six tossing at least 100 strikeouts in the circle, talent wasn’t a concern, which led to one of the best All-County teams we have ever put together. Below, you can find the first and second team as well as honorable mention players.

Pitcher: Annabelle Widra, freshman, Spain Park. The pitcher of the year and co-player of the year followed up a stellar eighth grade year with an impressive freshman year. She led the county with 264 strikeouts, which was close to double the next closest pitcher. She went 23-8 and held an ERA of 1.985. At the plate, she batted .453 with 62 hits and 27 RBIs.

Pitcher: Avery Barnett, junior, Helena. Barnett finished third in the county with 138 strikeouts, but led the county in wins with 25 after going 25-7 in the circle. She held an ERA of 2.1 in 172 innings pitched.

Catcher: Cassady Greenwood, senior, Oak Mountain. Greenwood finished her career impressively. She held a batting average of .416 and had 53 RBIs. She also finished second in the county with 20 doubles and picked up six home runs.

First Base: Kennedy Foote, sophomore, Thompson. If it says anything, Foote’s batting average of .451 was third on the team. She also finished third on the team with 64 hits showing the Warriors’ offensive dominance. She added 17 doubles, 10 home runs and 63 total hits to her resume. She was one of five THS players with 60-plus hits.

Second Base: Peri Clark, sophomore, Shelby County.  This year’s home run leader resides at Shelby County High School, and she’s just a sophomore. Clark ended the year with 26 home runs and a batting average of .519, which led to 56 RBIs.

Shortstop: Lauren Haskins, junior, Thompson. Finishing just five home runs behind Clark was one of our Co-Players of the Year in Haskins. She ended the year with a .582 batting average, a county-high 70 RBIs, a county-high 22 doubles, a county-high 96 hits and 21 home runs.

Third Base: Riley Coyne, senior, Briarwood. Coyne closed out her career with the Lions posting 12 home runs, 46 RBIs and a batting average of .448 to earn a spot on the team.

Outfield: Madison Bubel, senior, Thompson. Bubel was second on the team behind Haskins in most categories. She finished the season with a batting average of .485, 69 RBIs, 18 doubles, five home runs and 65 total hits.

Outfield: Jamie Gregg, senior, Helena. Another player that batted above .500, Gregg ended her season with a batting average of .516 with 48RBIs, 12 doubles, seven triples and three home runs.

Outfield: Katie Lively, senior, Helena. Gregg’s teammate and outfield companion, Lively led the Huskies at the plate with a .591 batting average as well as 16 doubles, 12 home runs and four triples.

Designated Hitter: Brooke Burback, sophomore, Chelsea. Burback made the first team for the second year in a row after holding a batting average of .447. She totaled 51 hits and had 36 RBIs, eight doubles and 11 home runs.

Designated Hitter: Grace Robertson, junior, Helena. Robertson held a batting average of .468 for the Huskies this year and finished second on the team with 53 RBIs. She also shared the team high in doubles with Lively posting 16.

Designated Hitter: Maddie Majors, junior, Spain Park. Majors continued to be a problem for opposing pitchers this season. She led Spain Park with a batting average of .477 and finished third in the county with 73 hits. She added 16 doubles, nine home runs and 47 RBIs to her resume.

Pitcher: Sarah Cespedes, senior, Chelsea. Cespedes has been a dominant pitcher in the county for several years and ended her career with a strong season. Leading her team back to the state tournament, Cespedes pitched 147.1 innings and had 133 strikeouts this season.

Pitcher: Abigail Bryars, sophomore, Chelsea. Cespedes’ teammate and future starter of the team, Bryars had a strong season as well. In just 82.2 innings, whe posted 103 strikeouts, a slim 19 walks and an ERA of 1.52.

Pitcher: Brianna Copeland, freshman, Pelham. Copeland was the starting pitcher for Pelham this season as a freshman. She finished the season with a record of 12-9 in 113.2 innings pitched and tossed 124 strikeouts with an ERA of 3.26. Her future is bright.

First Base: Torie Denkers, senior, Oak Mountain. Denkers batting average of .347 and 33 hits were good this year, but her 11 total home runs earned her a spot on the team thanks to several clutch late homers this season. That total tied for fourth in the county.

Second Base: Charley Clark, senior, Calera. Clark ended the season with a batting average of .472, which was one of the highest marks in the county and added 45 RBIs. She also picked up 50 total hits, 20 extra-base hits and six home runs.

Shortstop: Bailey Bowers, junior, Spain Park. The shortstop position is second to none and trying to figure out who to put here was difficult, but Bowers impressed throughout the year. She batted .441 with 35 RBIs this season and finished the year with 14 doubles and totaled 48 RBIs.

Third Base: Alexis Anderson, sophomore, Spain Park. Anderson missed a few games this season, but will be one of the Jags’ best players in the next couple of years. Several coaches talked about her skill before this team was put together. She batted .316 with 42 hits this season and added 40 RBIs and seven home runs.

Outfield: Kindall DeRamus, junior, Thompson. To show how impressive and difficult it is to make this team, DeRamus is on the second team with a batting average of .500. She finished the year with 16 doubles, three triples, one home run and 79 total hits, which led to 24 RBIs.

Outfield: Jenna Galloway, senior, Oak Mountain. Galloway led the county in extra base hits this season with 27 total thanks to 10 triples and 17 doubles. Those 27 hits were more than half of her 42 hits this year. She also ended the year with 31 RBIs.

Outfield: Georgia Hughes, senior, Montevallo. A senior that highlighted a young team, Hughes finished her career with a batting average of .411. She had 16 triples to lead the county and added eight doubles and a total of 51 hits this season, which led to 33 RBIs.

Designated Hitter: Allie Miller, senior, Thompson. Seemingly an automatic to reach base, Miller picked up 66 hits this season and held a batting average of .431 with 39 RBIs.

Designated Hitter: Yoly Paredes and Emily Shirley, juniors, Pelham. The Panthers’ two best hitters both deserved a spot. Shirley batted .424 with 30 RBIs, while Paredes batted .414 with 30 RBIs as well. They combined for 88 hits and 18 doubles this season.

Designated Hitter: Lydia Coleman, freshman, Briarwood. Coleman led Briarwood with a batting average of .488 this season and also posted a total of 28 RBIs.