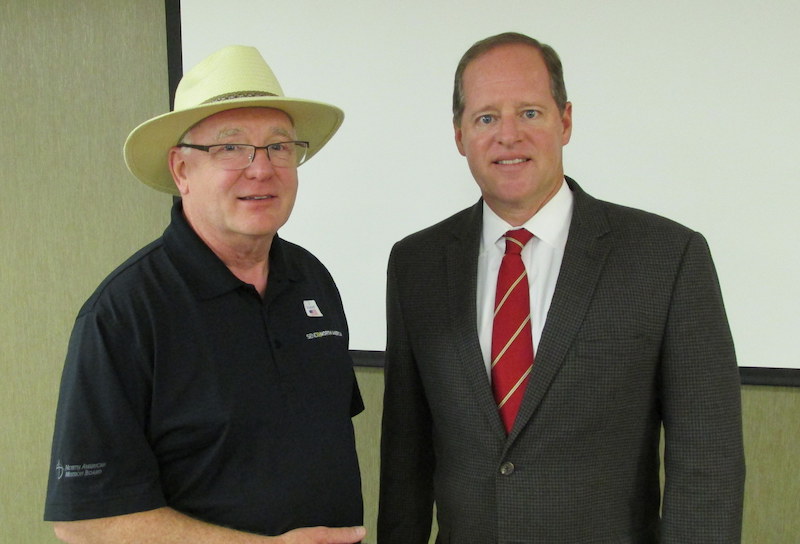 Dr. Hugh Richardson (left), missionary for the Shelby Baptist Association, took a moment to speak with Sen. Cam Ward after his presentation on June 5. (Contributed)

By Michael J. Brooks / Special to the Reporter

ALABASTER – Alabama District 14 Sen. Cam Ward said talking about prison reform, or voting for the construction of new prisons, isn’t a popular topic for politicians, nor a winning issue with most voters, but it’s something we must face.

Ward spoke to the monthly meeting of the Shelby Baptist Association’s Pastors Fellowship on June 5 at the Shelby Baptist Medical Center. His work as chair of the Senate Judiciary Committee has focused his energies on the topic of prisons, including testifying before the U.S. Congress.

“We live in America and we believe in a society based on laws and rules,” he said. “Sometimes our attitude is ‘they get what they deserve,’ and ‘out of sight, out of mind.’ But there are two reasons we can’t countenance such an attitude. One is that people aren’t animals. They have a soul and they have worth. And second, the 8th Amendment forbids ‘cruel and unusual punishment.’”

Ward said many patriotic citizens believe in the 2nd and 10th Amendments, but the 8th is part of the Bill of Rights, too.

“A federal judge used the 8th Amendment in California when the courts took over the prison system because of overcrowding,” he said. “California lost $7 billion in the process, and Alabama could very well face the same thing.”

Ward said another issue in prison reform is mental health.

“We think about half of inmates have some mental health issues,” he said. “This could be what brought them to drugs and violence. We’ve also seen veterans with PTSD who wind up in prison.”

Ward said the current opioid crisis is a tough issue.

“The drug-addicted are most often in city and county jails, but drugs impact the whole system” he said.

Ward said there are 18 prisons in Alabama, and the newest one—the Bibb County Correctional Faculty, built in 1996—might be the first to close.

“The prison was built in a swamp, and moisture has been an issue,” he said. “The building is prefabricated and we’re spending a ton of money maintaining it. This is like putting a bandage on the Titanic.”

“The state general fund is about $1.7 billion, and $800 million goes to Medicaid and $600 million goes to prisons,” he said. “So, $1.4 billion is already committed. The education budget is a separate entity at $6 billion.”

“Building a new school is fun,” he said. “Building a new prison is a hard sell. Some have advocated for one large facility in the state. Other states have tried this, and it seems to work well. Newer prisons are also more electronic. Some of our prisons aren’t even wired for security cameras. This is something we need to look at seriously.”

“A busy inmate is a safer inmate,” he said. “Job training helps maintain order in the system and helps with the resettlement issue after release.”

Ward said all the news isn’t bad since crime is down in the state and the recidivism rate—the number of inmates who return to prison—is likewise down. And Alabama is doing better with her prison population. At one time the state had 29,000 inmates, or 194 percent capacity, in a system built for 14,500. Now the inmate population is around 22,000, though this number is still high at about 161 percent capacity.

“The legislature spent $80 million in additional funds for prisons last year,” he said. “Much of this was for more parole officers. This expenditure is a good thing since parole officers help keep former inmates on track and encourage them to stay out of prison.”

Ward said his affiliation with Prison Fellowship has shown the value of Bible studies in prisons, and the value of ministries by local churches.

“AngelTree is a great ministry, too,” he said. “Allowing an inmate to give a gift to his or her child at Christmas makes a bond between them. It’s a simple act of kindness.”

“I encourage church members to go to the prisons, to fellowship and encourage inmates. Everyone needs a kind word, and we must be kind to inmates when they’re released, too.”

The Shelby Baptist Association’s Pastors Fellowship meets on the first Tuesday of each month, except in July. Charlie Dale, pastor of the First Baptist Church of Indian Springs, is the current president.