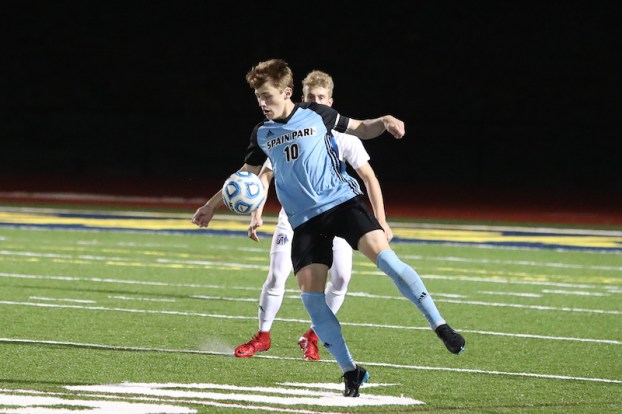 Spain Park senior forward Brooks Rice has been named the 2018 Alabama boys' Gatorade Player of the Year. (For the Reporter/Dawn Harrison)

HOOVER — In its 33rd year of honoring the nation’s best high school athletes, The Gatorade Company announced on Wednesday, June 6, that Brooks Rice of Spain Park High School was named its 2017-18 Gatorade Alabama Boys Soccer Player of the Year.

Rice is the first Gatorade Alabama Boys Soccer Player of the Year to be chosen from Spain Park High School. The award, which recognizes not only outstanding athletic excellence, but also high standards of academic achievement and exemplary character demonstrated on and off the field, distinguished Rice as Alabama’s best high school boys soccer player.

A member of the U.S. Youth Soccer Region III Olympic Development Team, he concluded his prep soccer career with 84 goals.

Rice has volunteered locally as a youth soccer coach and referee, and he has donated his time to multiple community service initiatives through his church.

“We had a young team this season, and Brooks was a calming influence on the players during the course of the game,” said Matt Hall, head coach of Spain Park High. “He is a very intelligent player who knows how to create space for himself and teammates to initiate attacks.”

Rice has maintained a 3.29 GPA in the classroom and has signed a national letter of intent to play soccer on scholarship at the University of North Carolina at Greensboro this fall.

As a Gatorade Player of the Year, Rice will be able to select a national or local youth sports organization to receive a grant as part of the Gatorade Play It Forward program.

Every Gatorade Player of the Year state winner receives a $1,000 grant to donate and will have the opportunity to enter for an additional $10,000 spotlight grant by writing a brief essay explaining why their selected organization deserves additional support.

A total of 12 spotlight grants – one for each sport – will be announced throughout the year.

By ALEC ETHEREDGE | Sports Editor  With 20 players in the county holding a batting average better than .400 this... read more