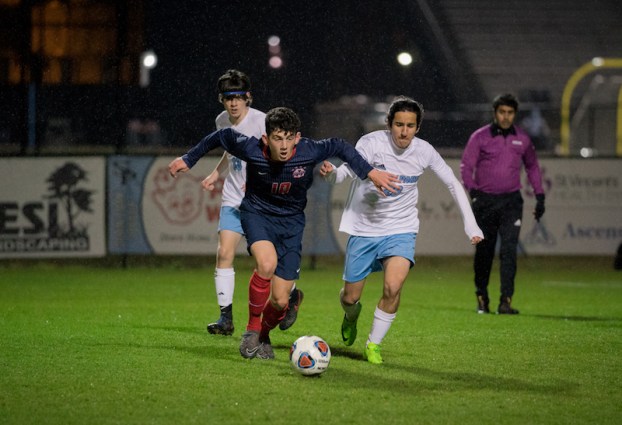 While the soccer season in Shelby County didn’t conclude with as many state champions as 2017, it wasn’t any less impressive of a season for the best players in the county.

Several players left their mark and legacy to finish up their senior season, while others set the standard for a strong return next year. Westminster at Oak Mountain was the county’s only state champion this year, but the talent extended across the county and is on display in this year’s All-County boys soccer team.

Forward: Logan Frost, junior, Briarwood. Frost was named this year’s Player of the Year in Shelby County after leading the county with 40 goals and adding 26 assists. He was the engine behind a team that won 21 consecutive games and finished runner-up in the state championship.

Forward: Brooks Rice, senior, Spain Park. This year’s boys Gatorade Player of the Year winner in the state, Rice finished second in the county with 37 goals and added 12 assists on top of that. He and Frost were the two best players I saw all year.

Forward: Lando Nichols, junior, Chelsea. Nichols is one of those players that seemingly never graduates. His junior season included 22 goals and nine assists in 22 starts. He will yet again be one of the best players in the state next year for a Chelsea team that will be very good.

Forward: Cole Hadley, senior, Thompson. Hadley was Thompson’s offensive MVP for more than just his goal scoring this year. While the senior posted 15 goals, he also added 19 assists to be the spark behind the Warriors’ goal-scoring this season.

Midfield: Irvin Rodriguez, junior, Pelham. Rodriguez was impressive as a sophomore and didn’t disappoint as a junior. He posted 13 goals and nine assists to earn the team MVP award. As a senior, I expect him to be one of the top players in the county.

Midfield: Donald Wilson, junior, Indian Springs. Wilson was named to the first team All-Metro Team as a junior and was possibly the best player on a team that ended the year 16-7-4 overall and a game short of the Final Four.

Midfield: Griffin Felton, senior, Briarwood. Felton was as key of a piece as anybody on Briarwood’s team this year and will be sorely missed moving forward. He totaled 18 goals for the Lions, but more importantly had 29 assists to lead the team.

Midfield: Price Leonard, junior, Westminster Oak Mountain. Leonard was the superstar of the state championship run, scoring both of the team’s goals in the semifinals and helped spark the offense in the title game as well eventually being named the MVP. He finished the season with 27 goals and seven assists.

Defender: Bryant Wood, senior, Briarwood. Most aggressive and energetic defender in the county. Wood helped the Lions pitch 17 shutouts this season and allowed only 20 goals this season.

Defender: Patrick Guffey, sophomore, Oak Mountain. Guffey has the ability to win player of the year as a defender before he graduates, which is tough to do. He was extremely impressive this season and was a Gatorade Player of the Year nominee as a sophomore. Finished the year with 12 goals and eight assists.

Defender: Ethan Acton, senior, Oak Mountain. This year’s defensive captain, Acton scored three goals and one assist for the Eagles. With he and Guffey, OMHS had one of the best defenses in the state.

Defender: Nigel Hilliard, senior, Pelham. Hilliard is a four-year starter for the Panthers and was the team’s defensive MVP in 2018. Aside from defense, he posted three goals and four assists as well, earning spots on the First Team All-State and All-Metro teams.

Defender: Noah Lunsford, senior, Chelsea. A team captain for the Hornets this season, Lunsford etched his name in the history books by blocking 21 shots this season to break the school record for blocked shots in a season.

Goalkeeper: Brodie Winks, junior, Westminster Oak Mountain. Winks had 17 clean sheets as a junior and was extremely impressive when it mattered during the postseason. In the playoffs, Winks gave up one combined goal and had three shutouts, including a shutout in the state championship game.

Forward: Hamilton Bowen, junior, Briarwood. Bowen and Frost will be a tough duo at the forward position next season for the Lions. Bowen ended his season with 18 goals and seven assists.

Forward: Jackson Murphy, senior, Oak Mountain. Murphy has battled a lot of injuries over the years, but has still been one of the most consistent players in the county. He ended the year with eight goals and 11 assists as the team’s captain. Ended his career as a three-time state champion.

Forward: Reece Eberhardt, senior, Spain Park. Without Rice on this team, Eberhardt would have dominated. He still was able to put up an impressive 13 goals and 11 assists.

Forward: Jackson Hall, senior, Thompson. Thompson was a strong team this season in a difficult area and Hall was one of the best players in that area. He ended the season with 16 goals and 12 assists in 22 games played.

Midfield: Cody Wells, junior, Oak Mountain. Wells was one of the strongest offensive playmakers and creators for the Eagles. He ended the season with eight goals and seven assits.

Midfield: Tony Nettuno, junior, Chelsea. Nettuno and Nichols have both been staples on this Chelsea team and have one more year together next season. Nettuno ended the year with 20 goals and 10 assists in 22 starts.

Midfield: Kevin Santana, junior, Thompson. Thompson’s MVP this season, Santana had 17 assists, which was just two behind Hadley. He could defend or start an offensive attack.

Midfield: Alex Poore, senior, Westminster Oak Mountain. Another key playmaker for this year’s only state champion in the county, Poore ended the season with 12 goals and had 17 clean sheets.

Defender: Jonathan Vazquez, junior, Pelham. Pelham’s defense had an up and down season this year, but Vazquez was solid all year. He will be the anchor of the defense next season. He also added four goals offensively.

Defender: Patrick McGuire, senior, Indian Springs. McGuire was the lead defender on a team that posted 11 shutouts this season and gave up two goals or less in 23 of their 27 games.

Defender: Nick Bryant, senior, Indian Springs. Nick Bryant gave Springs a second strong defender this season as the team spent the majority of the year ranked inside the top three of the standings.

Defender: Jacob Badalto, senior, Briarwood. Without Badalato, Briarwood wouldn’t have won 21 games in a row. He helped the team back to the state championship game and was part of a defense that gave up just 20 goals in 27 games.

Goalkeeper: Zay Brown, junior, Oak Mountain. Brown is an athletic goalkeeper that had a lot of pressure on him this season due to the offense not controlling the ball very much. He is the frontrunner for best keeper in the county next season after posting 12 shutouts and a goals against average of 0.9. He is an impressive player to watch.

By ALEC ETHEREDGE | Sports Editor NORTH SHELBY – From player of the year to coach of the year in... read more