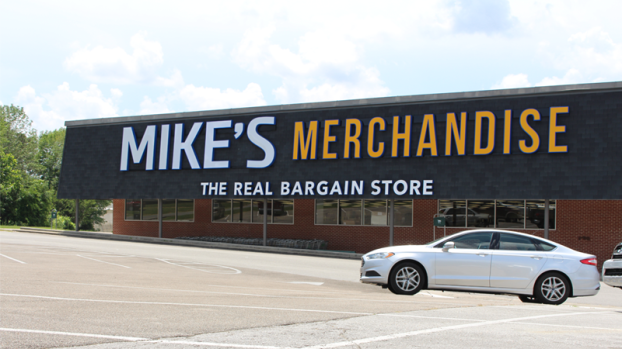 Mike's Merchandise is expected to be open by the end of June. (Reporter photo/ Brady Talbert)

PELHAM – An Alabama franchise, specializing in new products at reduced prices, is now coming to the Pelham area.

Mike’s Merchandise, a bargain store originally founded in Guntersville, Alabama, will soon have a new location in the Shelby Mart shopping center next to Cozumel Grill and Home Accents. The store offers a range of new products such as construction supplies, home goods, refrigerators, mattresses and clothing. Inventory is typically 50 percent below retail according to Pelham business owner John Cassimus. Cassimus believes each Mike’s Merchandise has its “own personality” and that consumers can expect a “diversity of products” at each location.

The owner said he chose the Pelham area because “retail in Birmingham is important” and that he had a good rent rate for the locale. Cassimus said there is “really not a large discount retailer in this area,” and that the business will create new jobs and increase local tax revenue.

Cassimus has not always been in the retail business. Cassimus was a former restaurateur, credited with growing Zoës Kitchen into a chain establishment. He said the business seen today on Wall Street is the restaurant he helped expand in 1999. Cassimus said the food field now has “too much supply,” and that the “number of restaurant seats has outgrown” consumer needs, which is why he made the switch.

Though there is no set opening date yet, consumers can expect an up-and-running Mike’s Merchandise around the end of June. The store is located at 2760 Pelham Parkway.

PELHAM – As part of its continuing commitment to the communities it serves, SouthWest Water Company has announced cash scholarships... read more