ALABASTER – A 34-year-old Alabaster man is being held in the Shelby County Jail on a $30,000 bond, and is possibly facing up to life in prison after he was arrested by the Alabaster Police Department on June 18 and charged with first-degree rape. 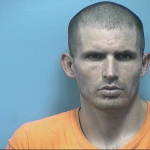 The APD arrested Kevin Bradly Gray, who lists an address on Joye Lane, and charged him with the Class A felony after the victim in the case filed a report at the police department shortly after the incident. According to court documents, the incident occurred on June 17.

“The victim in this case stated to detectives that Gray forcibly raped her,” read an APD statement. “The victim was able to fight Gray off and flee to safety.”

“The victim came to the Alabaster Police Department to report the incident shortly after the rape occurred,” Rauch said. “As a result, detectives were immediately notified and began their investigation. The facts gathered during the investigation resulted in a quick arrest of the offender.”

As of June 19, Gray remained in jail, and the APD was still investigating the case. Anyone with information concerning the case should contact detective Cody Channell at 664-6850.

Gray does not yet have a court date listed in Shelby County District Court.