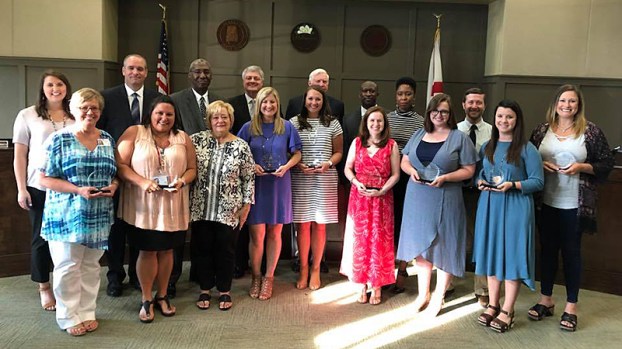 Several teachers were honored during a recent Alabaster Board of Education meeting for participating in the school system’s first beginning teacher mentor program over the past two years. (Contributed)

ALABASTER – Several Alabaster teachers who entered the profession a few years ago now have a much deeper understanding of how to operate a successful classroom, after they completed a two-year mentorship program with some of the city’s most experienced teachers.

Teachers at multiple schools in the city who began teaching within the past couple of years entered Alabaster City Schools’ first beginning teacher mentorship program, which was begun during the 2016-2017 school year.

Through the two-year program, the beginning teachers were paired with a more experienced teacher at their schools for “two years of intensive support” said ACS Superintendent Dr. Wayne Vickers.

“This is a very exciting time, and this program has been very beneficial for our teachers and our schools,” Vickers said while recognizing the teachers during a May Board of Education meeting. “We are one of the few school systems across the state that tries to do this and give new teachers the support that is needed.”

The following new teachers were paired with veteran teachers through the program, and were recognized during the May meeting:

By SETH HAGAN | For the Reporter  PELHAM – At 27 years of age Bill Strickland is taking over the... read more