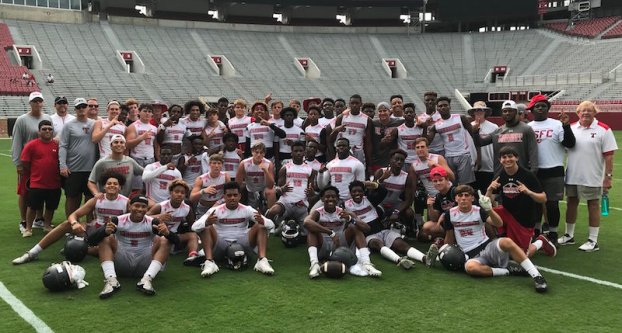 Thompson’s football team won the University of Alabama’s 7-on-7 event on Saturday, June 23, inside of Bryant-Denny Stadium to finish the event undefeated. (Contributed)

TUSCALOOSA – If you thought there would be any slowing down from the Thompson Warriors after one of their most historic seasons in school history, they are already trying to prove you wrong.

In the Warriors’ second 7-on-7 event at an in-state SEC school this summer, they were able to finish undefeated to take home the University of Alabama 7-on-7 championship on Saturday, June 23.

Two weeks earlier, Thompson competed at a 7-on-7 event held at Auburn University and finished as runner-ups in that event after scoring a late touchdown, but failing to convert a two-point conversion with very little time left that would have won them that title as well.

It’s already showing very early in the summer, even earlier than last year’s 7-on-7 success that started to rev everybody’s engine about this team, that despite losing their two best receivers and four best defensive players, that this year’s Warriors aren’t looking to regress at all.

In the event held on Alabama’s campus with the championship games being played inside the famed Bryant-Denny Stadium, Thompson finished undefeated in its division, which featured two region foes in Hewitt-Trussville and Hoover that will most likely be the Warriors’ toughest competition in defending their region championship this fall.

A large reason for the early success this summer is obviously due to the return of one of the best quarterbacks in the country as Alabama commit Taulia Tagovailoa continues showing not only his impressive skills that he flashed during his junior season, but also his growth at the quarterback position in a short amount of time.

While the return of his 35 touchdowns and 3,823 yards are key for the Warriors, guys are starting to step up and make a name for themselves.

Aside from Shadrick Byrd at running back, Will Conner at linebacker and Amari Kight and Jayme Simmons on the offensive line, the team lost a lot of production at skill positions both offensively and defensively.

Playmakers such as Jalen Bustamante, Michael Pettway, Kyle Smoak and many others are showing impressive flashes, which is important for the team as they not only need guys to step into starting roles, but need depth behind them.

Last year, Thompson had impressive showings in 7-on-7 events during the summer, including several titles and a runner-up finish at the USA National 7-on-7 event held at Hoover High School.

That successful run during the summer was a prelude to one of the best seasons the Warriors have ever seen, and now they’re hoping similar accomplishments this summer will give them the confidence they need to perform at an elite level again in 2018, and possibly take it a step further.

The Warriors have a few more 7-on-7 events this summer before they kick off the season against James Clemens in Montgomery’s Crampton Bowl on Friday, Aug. 24.