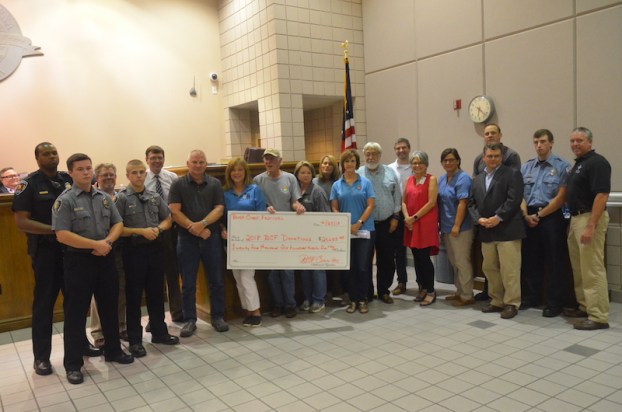 The 2018 Buck Creek Festival raised a total of $24,625 and had the largest number of sponsors, vendors, volunteers, attendance and duck tickets sold the weekend of May 11. (Reporter Photo/Graham Brooks)

HELENA–The 17th edition of Helena’s Buck Creek Festival the weekend of May 11 was the most successful to date in terms of sponsors, vendors, volunteers, attendance and duck tickets sold, according to members of the festival committee who were on hand to reveal totals at the June 25 Helena City Council meeting.

The Buck Creek Festival Committee presented several checks to organizations that devoted their time and volunteer efforts to make the 2018 festival the best so far.

Longtime festival organizer Cris Nelson said the festival saw its best numbers yet by raising a total of $24,625 thanks to four key things.

“We had one of the best years that we’ve ever had and there are four key things that make this festival work,” Nelson said. “The first thing is the sponsors and we had more sponsors than we’ve had since the inception of the festival and that says something. Ron (Holly) did an awesome job and we had more vendors than we’ve ever had, which sets the Buck Creek Festival apart from all the other festivals in the metro area. The second thing is the volunteers because this festival doesn’t happen without them. The third is the committee because they work tirelessly 12 months out of the year. Just because the festival ended in May we’re already planning the next one and I want to thank all the committee members. The fourth thing is the community because they come out and support the event. We had record crowds this year which is being spoken for with the duck tickets. We just want to thank everyone who makes this happen. With that being said, we had the best year ever.”

The organizations were presented checks after dedicating time and effort to help better the festival by doing things like picking up trash, working merchandise tents, helping run the concession stand, helping with public safety, volunteering at the children’s activity area, helping with the duck race, providing help on short notice and more.

The donations for the organizations were as follows:

–Helena Police Explorers–$500 plus an additional $840 for shuttle use.

–Helena schools–$500 to each school

The Helena High School Band Boosters received a large portion of the donations because of their work selling tickets to the iconic duck race. Only a few dozen tickets remained as the money will go toward instruments, uniforms, travel expenses and more that will be needed in the future.

Over the life of the festival, the total amount of money raised in 17 years is now $297,414. The money is placed back in the community for a variety of projects and organizations to benefit Helena.

PELHAM – Pelham Fire Chief Tim Honeycutt said no one was harmed in house fire on Monday, June 26, that... read more