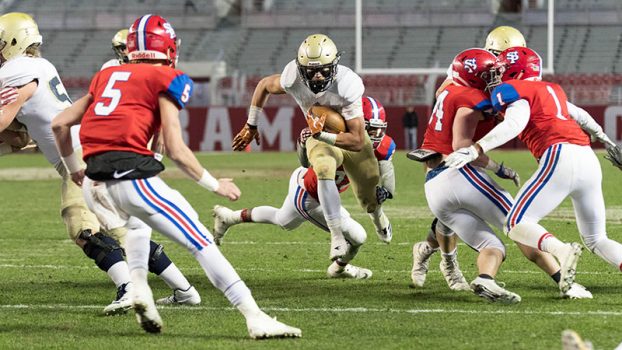 NORTH SHELBY – With family and friends all gathered in the same room, one of the county’s best athletes made his college announcement on Tuesday night, June 26, when Briarwood’s J.R. Tran-Reno committed to Vanderbilt University.

A rising-senior running back for the Lions, Tran-Reno said he came to the final decision on Saturday after a visit to Nashville and the Vanderbilt campus that included some time with head coach Derek Mason.

“It came down to that visit on Saturday,” Tran-Reno said after his announcement. “It’s top tier academics along with the best of the best every Saturday in SEC football.”

While Tran-Reno had several impressive schools on his final list including Louisville, Memphis, UAB and many others, but was drawn to what the Commodores had to offer.

“Overall it was probably the campus,” Tran-Reno said. “And the city of Nashville is awesome. Academics are great. It’s going to really set you up for life.”

Tran-Reno had originally narrowed his list down to 10 schools, none of which were Vanderbilt, but on June 18, the Commodores made a late pitch at him.

That led to him setting up a visit over the weekend, before committing just eight days after getting that offer.

A big reason for the easy decision is because of the position they told him he would be playing, which is a lot like what he was doing last year at the running back position.

“I’ll start out as a running back and then transition into a hybrid type of position,” he said.

That’s something he found a comfort in doing last year as a junior.

Tran-Reno stormed onto the scene, however, during his sophomore season when he wowed everyone with his ability to run, block and catch the ball from the running back position even at that young age. 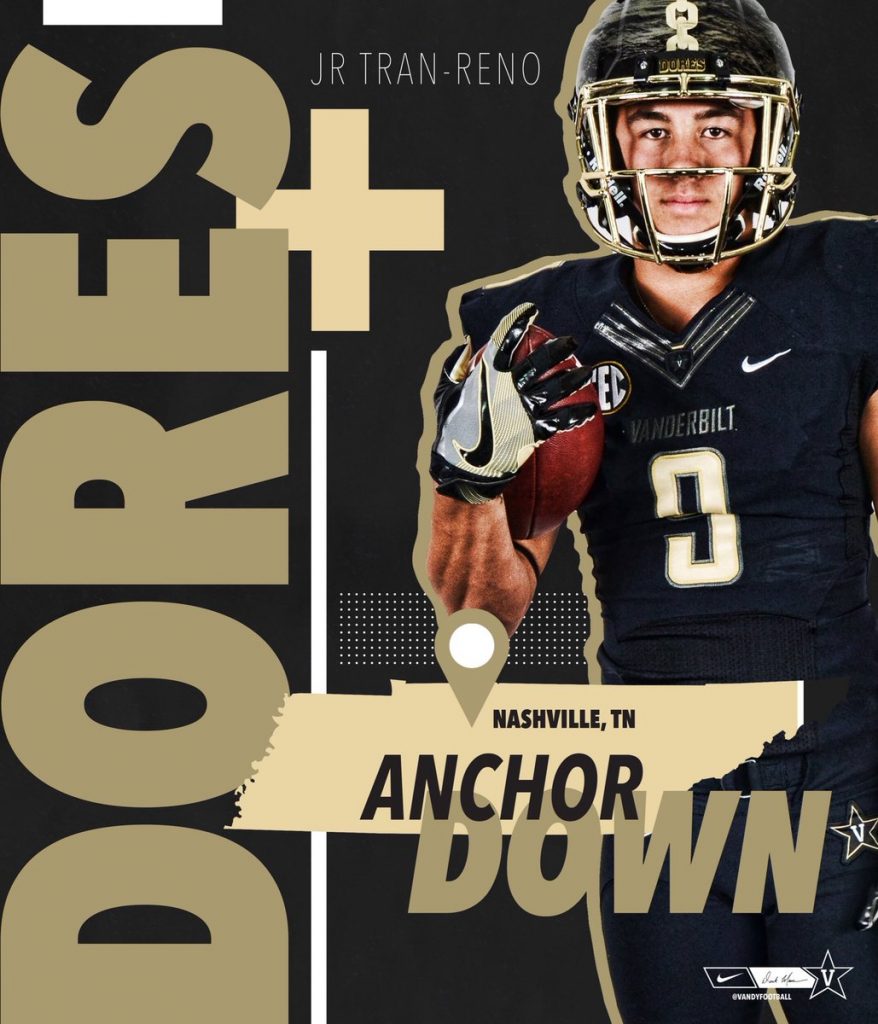 While his total number of rushing yards didn’t drastically increase during his junior year, you could see the growth of Tran-Reno as an all-around football player in the backfield.

He ended the season with 1,030 rushing yards, but with defenses honed in on his running skills, offensive coordinator Bobby Kerley started sending Tran-Reno out as a receiver more and more frequently.

It was a bold move that led to 543 receiving yards for the junior athlete, who ended the season with 1,696 all-purpose yards and 28 total touchdowns.

Through his sophomore and junior seasons, Tran-Reno has a combined 2,014 rushing yards and close to 3,000 all-purpose yards.

He has not only served as the team’s running back the last couple of years, but has also been a punt and kick returner, the team’s punter and even the quarterback at times.

Last year as a reserve quarterback to Michael Hiers, Tran-Reno had two touchdowns and 123 yards passing.

In 2018, those numbers should be much higher as he is projected to be the team’s starting quarterback this season, showing the true level of his versatility and athleticism.

“I’m really excited about it because I’m going to touch the ball every play,” Tran-Reno said. “I played quarterback all the way up until my sophomore year, so I feel like I’ll be ready for it.”

He added that he and the team are excited for the upcoming season and he feels like they have a strong team with some unfinished business.

That’s his focus for the time being, but with his dream now official, he is also excited for what lies ahead in 2019 as he joins a school in one of the best football conferences in the country.

“I grew up watching SEC football,” Tran-Reno said. “It’s always been a dream of mine to play at the highest level. I feel like I’ve made it there, and even though I’m not done yet, I’m glad I’ve made it to the SEC.”

Football has clearly been good to Tran-Reno, but he is also a standout student at Briarwood and knows academics can take him farther than anything, which is said was another exciting aspect to his decision.

“Academics is obviously second to none,” he said. “It’s an Ivy League education with the SEC. It can’t get much better than that.”

By GRAHAM BROOKS / Staff Writer HELENA–Entering its fifth season in program history, a lot of changes will be seen... read more