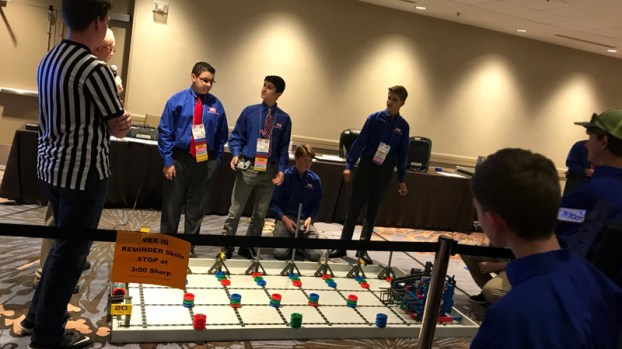 Oak Mountain Middle School advanced to the national competition, where they competed against teams from across the country, after winning the Alabama State TSA VEX IQ Robotics Competition in May.

The winning group from Oak Mountain was team 10740G, comprised of Ismael Choucha, Khaled Zuaiter, Aaron Pendry and Cade May.

Each year, an exciting engineering challenge is presented in the form of a game, which for the 2018 season was called “Ringmaster.” Robotics teams, with guidance from their teachers and mentors, build innovative robots and compete year-round in a variety of matches, including state competition and the Oak Mountain Middle School Robotics Team Photoannual National TSA conference.

In the Robot Skills competition, the students competed in programming skills and robot driving skills.

In the Teamwork Challenge, students worked in two-team collaborative alliances to achieve the highest possible score.

Oak Mountain Middle School also won the Excellence Award, which is the top and most coveted award of the entire competition, according to Sherri Whitehead, Project Lead the Way Engineering teacher and robotics team sponsor.

“I cannot put into words how impressed I am with the things Mrs. Whitehead and her students accomplish in these challenging robotics competitions with middle and even high school students from all over the nation,” OMMS Principal Larry Haynes said. “They work so well as a team and constantly are seeking ways to improve. I am so proud of them and will never cease to be amazed at their achievements.”

Whitehead said this current group of robotics students has been involved in the program since they were in sixth grade.

“They are some of the most hardworking and dedicated students I have ever taught. Since coming into my program, this team, 10740G, has won more awards than any other team,” Whitehead said. “The TSA Robotics National Championship is so well deserved! This group of students will be greatly missed as they begin high school next year. I look forward to seeing all they will accomplish at that level as well.”

MT LAUREL – Summer means fun for children, but at Hilltop Montessori School, the fun comes along with learning. The... read more