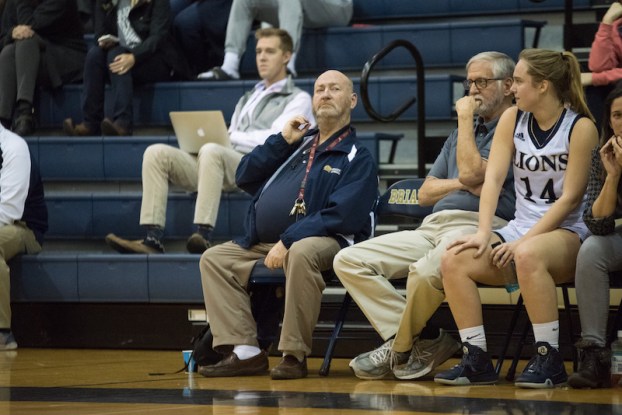 Briarwood's Jim Brown during the same game he picked up his 500th win as a head coach for the Lions. (File)

A lasting impact: Brown’s legacy will live on for generations

When you hear of someone passing away who you’ve formed a relationship with as a writer, it’s one of the most difficult situations to form thoughts about, much less put words on paper.

How on earth can I possibly do this person’s life justice in a short story? How do I bring to light all of the good this person did? How do I make people realize the impact that person had on so many throughout their life?

With a family celebrating a life and grieving at the same time, you want to make them smile and feel cheerful for what that person has accomplished in their life and will still continue to accomplish with their legacy.

When I heard of the passing of Briarwood’s Jim Brown on Monday, July 2, two days shy of his 63rd birthday, I didn’t even have to think about it at all, I knew exactly the moment that I realized what an incredible person he was as a teacher, coach and family member.

After winning his 500th game at Briarwood with a 48-30 girls basketball victory against Calera on Jan. 22, I talked with Brown after the game and was amazed.

I asked him what it meant to win his 500th game, specifically being at Briarwood, and at first he gave a joking remark of “It just means I’m getting old.”

But what followed was a moment that sticks with me to this day and showed the kind of person Brown was.

“I’ve been given the chance to work with some really good people,” he said. “This is the only place I have ever taught, and the only place I’ve ever wanted to be. That’s what makes this moment so special.”

On the verge of tears when he said those words, you knew he had poured his heart and soul into making a difference at Briarwood to share the Lord and life lessons with every person who crossed his path.

He wasn’t celebrating reaching a career milestone, he wasn’t just thankful for that one group of girls who helped him get that monumental win, no, he wasn’t selfish at all.

Instead, Brown was thankful for everybody in his 35 years at Briarwood who gave him the chance to be at the one place he truly wanted to be doing the one thing he had the biggest passion for in life.

It was a culmination of everything, not just personally, but as a leader and teacher. All of the people he had seen come and go through the years, he was happier for them and what they were able to accomplish, than he was for anything else.

One thing said during the celebration of life service was that if you talked to Brown for five minutes, you would quickly have a story to tell and know the passion he had for what he did.

Sitting near the back of the church when those words were spoken, having tried to unsuccessfully keep tears from pouring out of my eyes, I realized how true those words were.

Here I was, just the annoying sports reporter who needed his help for work that he talked to just a handful of times, yet I’m emotional thinking about the small impact he had on me.

Just seeing a little bit of his passion was enough to convince me of the incredible person he was. I can’t imagine the impact he had on the players who learned under him every day, the students who were impacted by his wisdom, the colleagues who got to know him, the officials he mingled with on the sidelines, the fellow coaches in the sports he competed against, all of those people got to know him a whole lot better than me and will help his legacy live on for eternity.

To his wife Lisa, and their kids Carleigh, Chris and Kevin, Jim Brown was a good man. He was a man I was happy to meet, and a man who had a bigger impact on life than many of us can ever imagine. He was, and always will be, a shining example of a man the world needs more of.