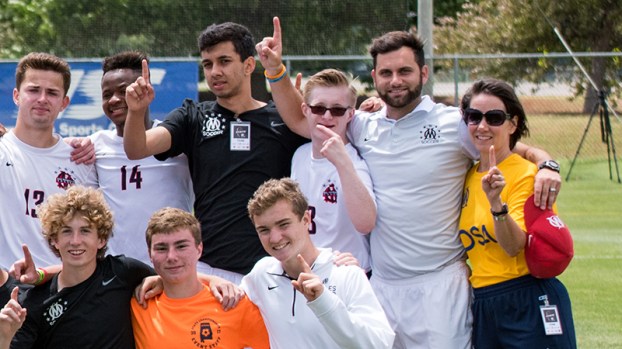 Oak Mountain High School soccer coach Dan DeMasters, second from right, will take the helm of the Alabaster City Schools soccer programs after he was hired by the Alabaster Board of Education during a July 9 meeting. (File)

ALABASTER – A local high school soccer coach with multiple state championships and more than 100 wins to his name will be taking the helm of the Alabaster City Schools soccer programs after he was hired by the Alabaster Board of Education during a July 9 meeting.

School Board members voted unanimously during the meeting to hire current Oak Mountain High School boys’ soccer coach Daniel DeMasters as the Warriors’ next girls’ head soccer coach and director of soccer for grades seven through 12 at Thompson High School and Thompson Middle School. DeMasters will teach math at THS.

“He is a quality teacher and a quality coach,” said Alabaster School Board President Adam Moseley. “It’s an excellent opportunity for our kids. We want to have the best programs we possibly can for all of our students.”

DeMasters has been with the OMHS soccer program since 2014, led the Eagles to a runner-up finish in his first year and won three state championships in a row from 2015-2017. He recorded his 100th win with the Eagles in April, and has become one of the most successful high school soccer coaches in the state during his time at Oak Mountain.

Following the Eagles’ 28-0-2 state championship season in 2016, DeMasters was named the National Soccer Coaches Association of America’s Coach of the Year for large schools in Alabama, and the Eagles were named the top high school soccer team in the country by the same organization.

DeMasters is a Philadelphia native and played collegiately at Villanova University. He coached collegiate soccer in Pennsylvania before moving to Birmingham to join the Eagles.

During his high school playing career, DeMasters was a three-time high school All-American and was the Pennsylvania Gatorade Player of the Year and later represented the United States in the USYSA Region 1 Olympic Development Team in Europe.

“He’s just a great guy, and we are excited about what he is bringing to our school system,” said ACS Superintendent Dr. Wayne Vickers.

By ALEC ETHEREDGE | Sports Editor While Class 7A, Region 3 has been believed to be the toughest classification in... read more