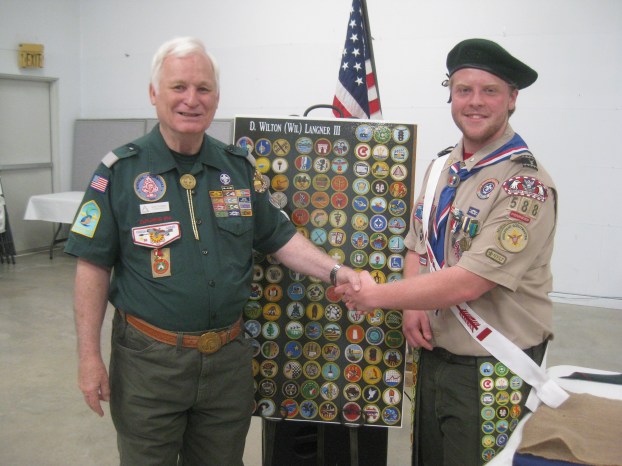 WILSONVILLE – On Sunday, July 8, Wil Langner, of Wilsonville’s Boy Scout Troop 588, was honored for achieving a feat that very few accomplish during their time as a Boy Scout.

From ice skating to scuba diving and wake boarding, Wil Langner has earned all 137 of the merit badges that a Boy Scout can earn – far beyond the 17 merit badges required to become an Eagle Scout.

Actually, he has 138 merit badges under his belt because one of them was discontinued after he had already earned it.

“It’s such a rare accomplishment,” said Jay Elliot, the Shelby County executive for Boy Scouts of America. “It’s very rare in the history of the Boy Scouts.”

A Court of Honor, which was attended by district and state representatives from Boy Scouts of America, was held at Wilsonville United Methodist Church on July 8, the same day as Wil Langner’s 18th birthday, to honor his accomplishments and to conduct an aging-out ceremony. An aging-out ceremony happens when a Boy Scout turns 18 and can no longer be a part of the troop as a youth member.

After becoming an Eagle Scout at 13 years old, Wil Langner said he was still having so much fun that he didn’t want to stop there.

“I just decided to set a new goal of earning all of the merit badges,” he said. “I feel like I have a working knowledge of a lot of different things and it has given me a broad outlook on life, my future and potential career opportunities.”

Boy Scouts also hold a special place in his heart because it’s something that he and his father have in common. His father Don Langner is the Scoutmaster of his troop.

Wil is set to begin his senior year of high school this fall, and after graduation he plans to attend college. He’s not sure of a career path yet, but law, politics, aviation and music are among his interests. He plays the guitar and piano.

To his knowledge, Wil Langner said he joins the ranks of fewer than 400 scouts to have earned all of the merit badges in the history of the organization. He now plans to become a Junior Scoutmaster.

His mother, Melanie Langner, said most of the badges were earned as he studied those subjects during homeschooling.

“We’re very proud of him, but now that he’s 18, he’s no longer our little boy,” his mother said. “A lot of kids become an Eagle Scout and then they leave but he’s really grown and matured as a leader in Boy Scouts. He has attended several leadership camps and has made a lot of connections with people who can help him in the future.”

Wil said it’s cool to be recognized for his accomplishments, but recognition was never his motivation.

“This is not something that I was expecting,” he said. “This was just a personal goal of mine.”

But he said the best part about his journey has not been the accolades he’s received; it’s the lifelong friendships that have formed.