COLUMBIANA – A Shelby County Circuit Court judge has ordered an arrest warrant be issued against a 25-year-old Selma man who is facing charges he allegedly robbed a victim at gunpoint in Alabaster in 2017 after the suspect was recently charged with a domestic violence charge. 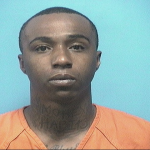 Judge William Bostick on July 16 granted the prosecution’s request to revoke the bond for Keldrin Maurice Burns, who lists an address on Bare Trace in Selma, after Burns was charged with third-degree domestic violence while on bond for robbery and assault charges.

The domestic violence charge is tied to a July 9 incident, during which Burns allegedly “punched (the) victim, causing cuts and bruises all over his body.”

When he was arrested on the third-degree domestic violence charge, Burns was on bond for a first-degree robbery charge and a second-degree assault charge brought against him in 2017.

Burns was arrested along with fellow Alabaster resident Joshua Allen by the Alabaster Police Department on Feb. 18, 2017, and charged with the felonies.

The charges came after Allen and Burns allegedly robbed a victim of a cell phone, wallet, cash, multiple credit cards, a Social Security card and a driver’s license, and allegedly injured the victim with a handgun during a Feb. 14, 2017, incident.

The suspects could face up to life in prison and fines of up to $60,000. Second-degree assault is a class C felony, which carries a penalty of up to 10 years in prison and a maximum fine of $15,000 upon conviction. Because a firearm was used in the crime, the suspects would face a minimum penalty of 10 years imprisonment if they are convicted.

Both Allen and Burns were released from the Shelby County Jail on bonds totaling $75,000 apiece while awaiting the outcome of their cases.

As of July 18, Allen’s charges were still pending in Shelby County District Court.