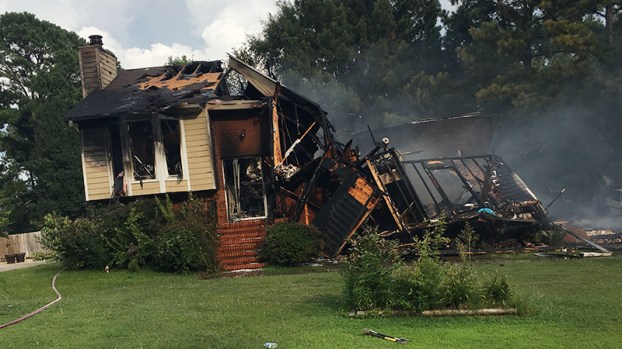 A home in Alabaster’s Meadowlark subdivision was declared a total loss on July 30 after a fire quickly engulfed the home. The home was vacant when the blaze started, and no injuries were reported. (Contributed)

ALABASTER – No injuries were reported, but a home in Alabaster’s Meadowlark subdivision was declared a total loss and later collapsed following a house fire on the afternoon of July 30.

The Alabaster Fire Department responded to the blaze at about 4:30 p.m. on Willow Creek Court off Shelby County 95 after receiving a report of a residential fire. When firefighters arrived, they witnessed flames emanating from the house, and were able to quickly contain the blaze, said Alabaster Fire Chief Tim Love.

Love said the home was unoccupied when the fire started, and no firefighters were injured while working to extinguish the blaze.

About 30 minutes after firefighters arrived, and after the fire was under control, about 50 percent of the home’s structure collapsed. As a result, the AFD brought in special equipment to push the remainder of the structure down to prevent it from later collapsing and possibly causing injuries.

“We were on the scene until about 10 p.m. It’s very unusual for us to be on a scene that long, but we had to make sure the rest of the structure was pushed down because of the fear it may fall down later,” Love said.

The Alabaster Community Give Backers organization has already begun efforts to provide necessities for the family, such as clothing, and is seeking donated items to help the family get back on its feet. To learn more about what items are needed, visit https://www.facebook.com/Alabaster-Community-Give-Backers-143294663059821/

By NEAL WAGNER / Managing Editor ALABASTER – The Alabaster Fire Department is asking for the public’s help to support... read more