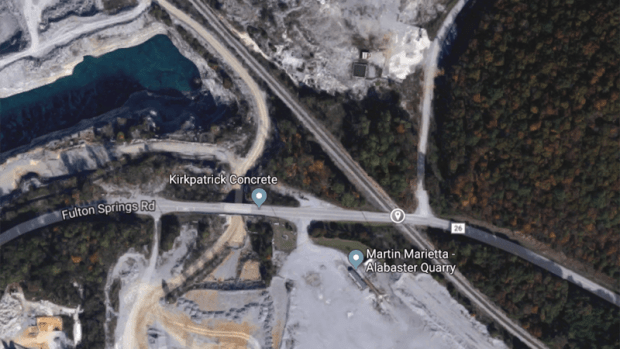 A 43-year-old Oneonta woman has been charged with reckless murder after her vehicle was struck by a train on Fulton Springs Road on the night of July 30. A 4-year-old child died in the crash. (Contributed)

ALABASTER – A 4-year-old child was killed and the child’s mother was airlifted to UAB Hospital after their vehicle was struck by a train at a crossing on Fulton Springs Road, according to the Alabaster Fire Department.

The crash happened shortly before midnight on July 30 at the crossing near the Martin Marietta quarry on Fulton Springs Road, said Alabaster Fire Chief Tim Love. Sharon Smith, 4, of Oneonta, was pronounced dead on the scene following the crash, and the child’s mother was airlifted to UAB Hospital where she was listed in stable condition on July 31.

The crossing is marked by flashing signals, but does not have crossing arms.

On July 31, the Alabaster Police Department said the cause of the crash was still under investigation, “and at a critical phase,” meaning “any additional information at this time could harm a successful and fair outcome.”

CALERA – A Calera church is offering a support group for those who are grieving the death of a loved... read more