COLUMBIANA–A woman facing an alleged charge of sexual abuse of a child less than 12 years old will have her case bound over to a Shelby County grand jury, according to court documents. 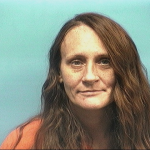 Charlotte Delline Moore, 40, was arrested by The Helena Police Department on March 29 and charged her with one felony count of sexual abuse of a child younger that 12.

The alleged incident occurred on Wednesday, March 28, when the Helena Police Department responded to the 2900 block of Dublin Drive on a report of sexual abuse. Once on the scene, they were informed that a white female had approached a juvenile white male under the age of 12 and touched him inappropriately while conversing with him.

Helena Police officers began looking for the white female described and located Moore. Moore matched the description of the suspect and was identified as the person who committed the offense. Moore was arrested and placed in Helena City Jail to await transport to Shelby County Jail.

On June 7, the charge of sexual abuse of a child younger than 12 was bound over to a grand jury after a preliminary hearing.

According to court documents, on June 18, Moore filed a handwritten blind plea motion in an effort to remove the motion for the case to be bound over to a grand jury.

On June 21, Shelby County District Court Judge Daniel Crowson denied the motion for the blind plea as the case remains bound over to a grand jury.

Sexual abuse of a child younger than 12 is a Class B felony and Moore could face up to 20 years in prison upon conviction.