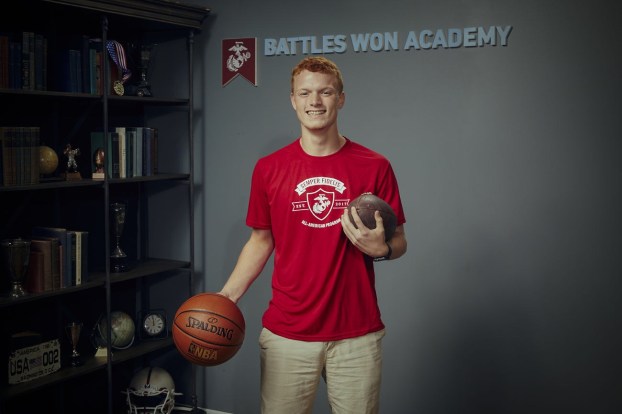 Grayson Dill was recently awarded with an all-expenses paid trip to Washington, D.C. as a part of a program created by the U.S. Marine Corps. (Contributed)

PELHAM –  A Pelham High School student was recently rewarded for his perseverance, dedication and hard work when he had the opportunity to participate in an all-expenses paid trip to Washington, D.C. as a part of a program created by the U.S. Marine Corps.

In July, PHS rising senior Grayson Dill attended the four-day Battles Won Academy, presented by the Marine Corps’ Semper Fidelis All-American Program. The program recognizes high school students who have faced challenges with conviction and determination to succeed. To celebrate their successes, the students were treated to a trip to D.C., and they were allowed bring a mentor with them.

“These students embody the same fighting spirit that Marines stand for by taking on the challenges of succeeding academically while bettering their communities and excelling in athletics and extracurricular activities,” read the program’s website. “They have turned obstacles into victories through drive and passion.”

During the Battles Won Academy, participants participated in daily workouts, had an immersive Marine Corps experience on base in Quantico, Virginia, participated in target practice at a simulated firing range, visited the National Archives, participated in a scavenger hunt at the National Mall, assembled bicycles for children at the Boys and Girls Club and learned basic hand to hand combat.

“We learned how to flip someone and that was pretty cool,” Dill said. “But the best part was meeting different people and learning from their experiences. We talked about our challenges and how we overcame them. It was great being able to talk to people of similar interests.”

PHS basketball coach Joel Floyd nominated him for the program.

“Grayson is a leader in the classroom and as a part of the basketball program,” Floyd said. “When I heard about the program, I thought he was the perfect person to nominate because he works so hard on and off the court.”

Floyd said Dill is an exemplary student who “gives his absolute best in everything he does.”

It’s was Dill’s determination to recover and return to playing basketball and football after two incidents of a torn ACL, once when he was 12, again at 14, and both in his right knee, that made him the perfect candidate for the Battles Won Academy. The first time he tore his ACL was during a basketball game.

“I was coming down from a layup, there was a lady leaning on the wall in front of me, and I tried to avoid falling on her and I just landed wrong,” he said.

After surgery, it took Dill only four months to recover from the injury, and then he was back to playing sports. But just two years later, Dill completely tore is ACL again in the same knee while at football practice.

“The second time was really frustrating because we thought it was only a meniscus tear, which wouldn’t have been as bad,” he said.

This time around his recovery required about seven months of rehabilitation and conditioning training.

“The first recovery was quicker than normal,” he said. “The average time is six to eight months, which is how long the second one took. I’ve always been a hard worker so it was normal to me to have the mindset of getting better so I could return as fast as possible. I didn’t want to miss out on sports or opportunities.”

Dill said his parents pushed him and kept him encouraged and his youth group at Pelham First Baptist Church was also very supportive.

“I was so grateful for that,” he said.

In addition to overcoming obstacles, participants of the Battles Won Academy were required to have a 3.5 GPA or higher on a 4.0 scale, be active in community service, play on a competitive sports team and hold a leadership position at school or in the community. Applicants were required to complete an application and write an essay about their “battles won.”

Out of the 6,000 high school juniors who applied for the program, only 50 boys and 50 girls were chosen.

Dill is an honor student at PHS, a varsity football and basketball player, was named the MVP defensive player last season in basketball, has been a peer helper for the last three years, a PHS ambassador for the past two years, is an active member of Pelham First Baptist Church and a member of the youth praise team where he plays the guitar. He has also played AAU basketball for the Alabama Flames for the past seven seasons and works part time. He hopes to go to college to become a physical therapist.

PHS field house to be completed in September

PELHAM – The construction of a new field house at Pelham High School is expected to be completed shortly after... read more