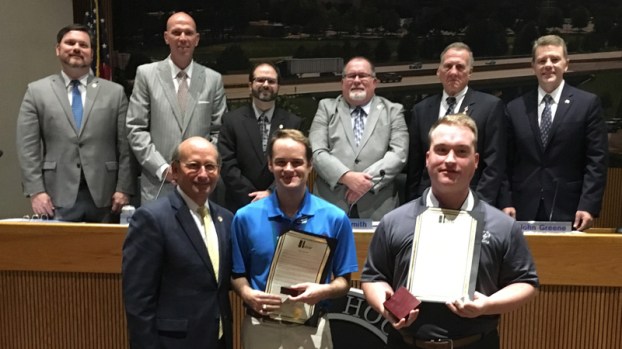 Wyman Freeman and Graham Dawson both participate in the Therapeutic Recreation Program at the Hoover Recreation Center and competed in the national Special Olympics competition in Seattle from July 1-6.

Freeman, a Hoover resident and 2003 graduate of Hoover High School, earned silver medals in the 100-meter backstroke and 4×25-meter relay.

Dawson, a Homewood resident, earned a silver medal in the 4×25-meter relay.

“I invite and encourage all citizens of the city of Hoover to join with me in recognizing Wyman’s hard work, positive attitude, determination and dedication to the sport of swimming, and in thanking him for being an outstanding representative of the city of Hoover,” read a proclamation from Hoover Mayor Frank Brocato congratulating Freeman, and a similar proclamation was presented to Dawson.

Freeman was part of the first group to participate in the Therapeutic Recreation Program in the city, and began participating in Special Olympics when he was 8 years old.

He is undefeated in his swimming disciplines at the state level, where he won three gold medals in the Alabama Special Olympics in 2017.

Want to learn how to fly a plane?

By NEAL WAGNER / Managing Editor Those interested in learning about the basics of taking to the skies in an... read more