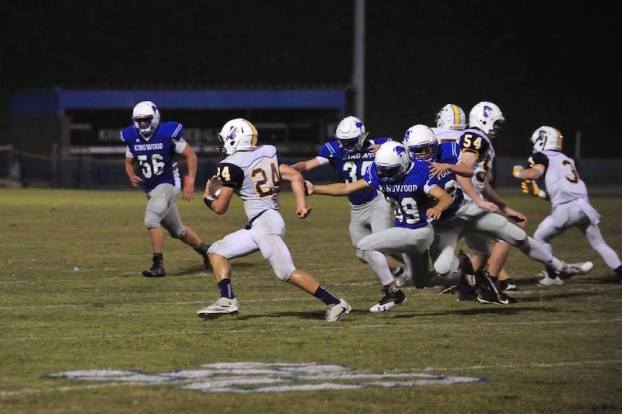 The Cornerstone Chargers return most of their skill players and add some key tools to its 2018 team, which has head coach James Lee excited for what's ahead. (File)

The Cornerstone Chargers are coming off a solid 6-5 season in 2017 that saw a playoff berth under first-year head coach James Lee.

Now in 2018, Lee, a longtime assistant at the school, feels as confident as he ever has in his time at the school, in large part, due to the change in classifications.

Last year, the Chargers competed in Class AA, but in 2018, they’ll be moving down to Class A with slightly more players on the roster than last season’s squad.

With that move and the number of solid playmakers back, Lee thinks Cornerstone could be in for an exciting season that will feature a further push in the postseason.

If that’s going to be the case, it will start with the progression of first-year quarterback Nick Green, who is taking over for Rhett Garrett, who had an impressive senior season last year.

Green has won the locker room over and has guys ready to follow his lead this year. If he’s able to spread the ball around and gain confidence as the starter, there are enough skill players on both sides of the ball to make this season a special one for the Chargers.

To help take some pressure off Green, Cornerstone will rely on a solid running back in Jeremiah Crenshaw who transferred to Cornerstone in the offseason after spending the last few years at Shelby County High School. He’ll be a big back with quick feet.

Adding to a talented run game will be an impressive set of receivers led by Jake Blankenship and Tanner Falkner, two of the best athletes on the team and in the county. Isaac Bradshaw will add another playmaker as a deep downfield threat, creating a special unit.

The entire offense will have a solid line to protect them despite the loss of All-County lineman Landon Guy. Justus Adams, Warren Goodwin, Brady Edwards, Zac Murphy, Jackson Causey and Lane Bailey are all trustworthy guys that will spend time at the position.

At the linebacker position, Bailey and Blankenship will be two leaders on the outside with good speed and strength. In between those two at middle linebacker will be Mason Richards, who adds a third capable body to the mix.

One of the most exciting units on the defense, however, is the secondary, which will have a good combination of speed and strength. Falkner, Green and Crenshaw will all get time at safety and corner, while some younger athletes will add help and depth.

Prediction: Coming off a 6-5 season and a playoff berth in 2017, this year’s Cornerstone team will move down a classification and has a lot of its production back for this season. With the stars aligning, it looks like this year’s squad could be a 7-3 regular-season team that advances out of the first round of the playoffs. At the worst, I see a 5-5 regular season depending on QB play, but this should be an impressive year for the Chargers.

By GRAHAM BROOKS / Staff Writer HELENA–Young girls interested in learning more about the game of basketball won’t have to... read more