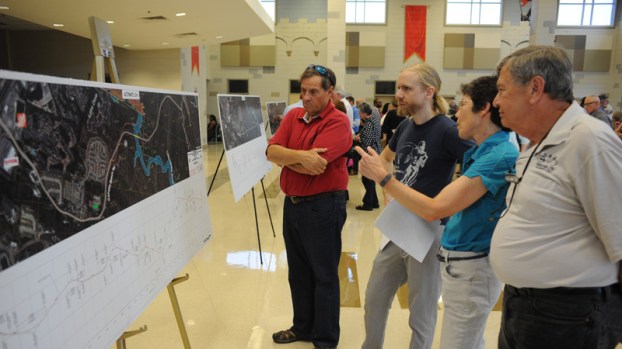 Residents look over a map of a proposed route for the extension of Cahaba Beach Road. (REPORTER PHOTO/STEPHEN DAWKINS)

VESTAVIA HILLS – Studies of the potential extension of Cahaba Beach Road will focus on a model with limited development along the road, but some residents and environmental groups remain skeptical of the project and its impact.

A third public involvement meeting about the project was held on Tuesday, Aug. 7, at Liberty Park Middle School in Vestavia Hills.

The project would connect U.S. 280 in Shelby County to Sicard Hollow Road near the Liberty Park development.

Supporters say the project would alleviate traffic on U.S. 280 and provide another route to the busy corridor for Liberty Park residents, but others maintain the road could harm the environment around Little Cahaba River, a primary tributary of the Cahaba River, which supplies drinking water for Birmingham.

Though the five options presented to the public at the last meeting—four potential routes and “no build”—remain on the table, Alabama Department of Transportation East Central Region Engineer DeJarvis Leonard said “advanced studies” from this point would focus on “full-control access” models.

Advanced studies include environmental impact, Leonard said, and full-control access means development would not be allowed along the corridor.

The full-control access approach is based on feedback from previous public meetings, Leonard said.

“The concerns we had received earlier was that this was a pristine environment, and that we wanted to keep it that way as much as possible,” Leonard said.

But many of those at the meeting remain opposed to the project. Several attendees wore shirts declaring “Save Greater Birmingham’s Drinking Water,” and David Butler with Cahaba Riverkeeper said officials should consider the potential negative consequences for residents whose drinking water comes from the river.

The potential risks of the project outweigh the reward of eased congestion on U.S. 280, Butler said.

“This is a particularly sensitive area,” he said.

Cheek said he flyfishes in the Cahaba and Little Cahaba rivers.

“I believe in access to the river, but I just don’t know what’s the purpose of the road,” Cheek said.

There is no timetable on the project, Leonard said and added that it could take a couple of more years to arrive at a final design and more opportunities will be presented for public input.

FROM STAFF REPORTS The Alabama Department of Public Health’s Immunization Division is currently investigating a pertussis outbreak in Shelby and... read more