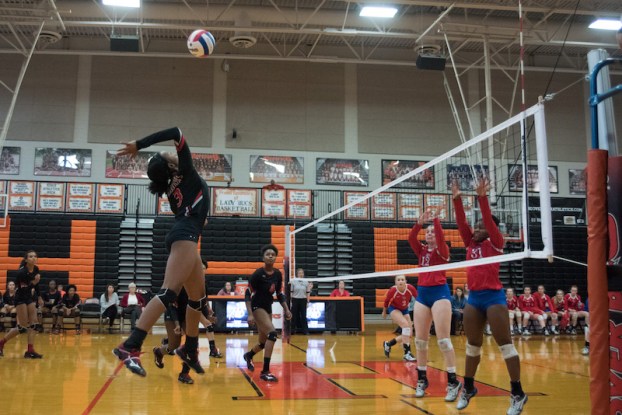 Thompson's volleyball team has a great chance to be the best it has been in years this season thanks to a returning cast of impressive playmakers that is bought in. (File)

Is this the year Thompson volleyball breaks through?

A special group of five seniors, and several other playmakers, have the Thompson Warriors’ volleyball team believing this could be a special season on the court.

Heading into year four under head coach Judy Green, and a brand new state-of-the-art facility for the team to compete in, the confidence and excitement continues to build for this team that has been on the verge of breakthrough the last couple of years.

“This is the first group of seniors that have gone through all four years with me,” Green said. “They’ve grown so much in that time and are now seniors that have improved and have made a commitment this offseason to take this program to the next level.”

Due to the move into the new arena, the players feel this is the year to break through and show that Thompson volleyball can be a contender for a state championship.

“It’s very important this year,” junior Kolbi Reed said. “We are the first athletic program to play in the new arena at the new high school. We aren’t just focused on the results for ourselves, but are also focusing on doing it for the team and city.”

It’s a shift in focus for Reed, who is a junior this year, as well as the rest of the team, who have committed to the program and helping achieve the loftiest of goals.

“They are some of the best people we have in our school,” Green said. “Young women of character that are good students and love being a part of our program. Our mindset is where it needs to be and the kids are committed to the program.”

It’s a culture change that started two weeks after the season ended.

“We didn’t want to make them just bigger, faster and stronger, we wanted to have the right mindset and culture,” Green said. “We needed the people in the program that were proud of the name on the jersey instead of their own name.”

Green said the team has made the adjustments thanks to the four “big rocks:” Respect, mental toughness, being a good teammate and learning to learn.

All of those keys have led to the opening for great success this season with the Warriors being regarded as a strong contender moving into the season.

“We have all of the pieces we need,” Green said. “Our setters are young and inexperienced in big game play but they are terrific. They’ve been nothing short of amazing this summer and in the offseason. We have to want to do it for each other. Nobody has a hidden agenda. Want to be the best person we can be every day.”

Green added that the team is still trying to figure out some strategy for the season, but she knows this team has the ability to compete at a high level and has complete faith in everybody’s positions, saying they have been solidified.

“People are excited when they see us working hard and we want to make sure to not let them down,” Kinsleigh Sabo said. “A lot of people have put a lot of work into giving us the best athletic facility and we don’t want to disappoint them.”