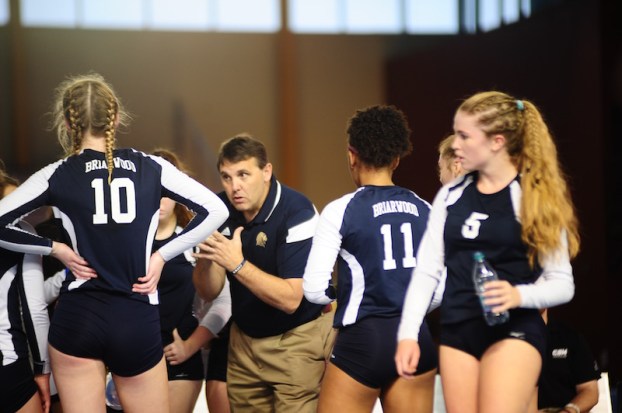 Briarwood volleyball head coach Jeff Robertson knows he has a young team this year, but also knows they are athletic, and expects them to go on a nice run. (File)

The Briarwood Christian School volleyball team ended last season with a lot of momentum, winning seven of its last 10 matches, including postseason play, before falling in the second round of the playoffs to finish off the 2017 season at 12-10.

Now in 2018, despite a young and inexperienced roster, head coach Jeff Robertson and the Lions are hoping to let that success trickle over into the new season.

“This is one of the most inexperienced teams we’ve had at Briarwood in a while,” Robertson said. “We are going to be young, but be very athletic. We look to compete well against a tough schedule.”

He said those remarks about being young in his 12th year as part of the Lions’ program, and while it’s going to be a young team that will have some growing pains throughout the season, Robertson said there is plenty of reason to be optimistic and for this year’s squad to actually have high expectations.

“We’ll be competing to get into the elite eight if everybody progresses like we hope,” he said. “I think we are very talented. We have a great group of sophomores. Several will help us this year. Our junior class is very strong. A lot of our girls play club ball so they have that experience; now, it’s just adjusting to the speed of the game.”

It’s an adjustment that will have to happen quickly with a lot of players due to only two returning varsity players to this year’s team, but both of those players bring back confidence and leadership.

“Taking responsibility is something we need to work on so we can set an example for all of the younger players,” said setter Anna Grace Pattillo. “Younger players sometimes don’t catch things that we need to be able to help them improve.”

It’s a change in scenery for both her and teammate Kaley Bruce, who is also looking to step up as one of the two returnees.

“I’ve been on varsity since I was a freshman,” the outside hitter said. “The competition level isn’t different, but the girls are different. It’s an entire new group this year. We have to be leaders and hold them accountable together.”

And Robertson isn’t scared to let either player take the bull by the horns.

“If there is a mistake made, those two have the ability to stop practice and say we need to do 10 pushups. They have the power to do that,” Robertson said.

While both are looking to help the team come along, there is something they are excited about — the defense. When asked what aspect of the team was coming together so far, each answered simultaneously without even giving a second thought that the defense was going to be a positive for this year’s team.

That’s something that will, at the very least, keep the Lions in every contest, which will be key with the difficult schedule.

“I’m just stressing buying in right now,” Robertson said. “We do play a fairly tough schedule so there will be some rough nights. We’ll take those experiences and build on it so come area tournament and super regionals we’ll be hitting on all cylinders, so it’s really buying into the process.”

By ALEC ETHEREDGE | Sports Editor The Helena Huskies’ volleyball team is coming off a season in which its only... read more