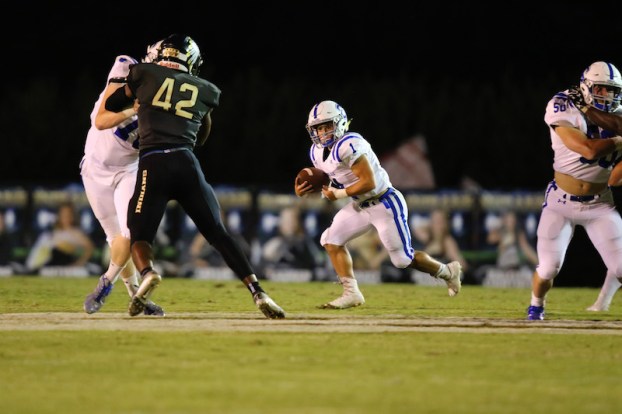 Chelsea's Collier Blair will be a major focus on offense for the Hornets this year as they look to bounce back from a 2-8 season last year. (File)

It’s a new era for Chelsea football with former head coach Chris Elmore going back to his alma mater to take over as head coach at Fort Payne High School.

With his departure comes a young head coach with expectation and excitement in Dustin Goodwin, who spent the last three seasons at Plainview High School where he led the Bears to two 6-5 seasons before a 9-2 season last year, reaching the playoffs each season.

Goodwin steps into a situation where Chelsea is coming off a 2-8 season, meaning he has his work cut out for him.

The good news, however, is that the Hornets’ two wins last year came in their final three games with the only loss in that time span being an eight-point defeat to Cullman.

With that ending to the season, Chelsea was able to gather some momentum heading into the offseason with most of the team returning for the 2018 season.

One of the biggest problems for the Hornets this year will be timing. Elmore took the Fort Payne job late in the spring, and Goodwin wasn’t hired until the very end of the school year.

That has left him with little time to figure out exactly what he has to work with, but the head coach has been working diligently over the summer and in fall practice to get it all organized.

As an offensive minded coach, Goodwin has gotten to know a lot about those players, but is still trying to get them to buy into his philosophy.

Who will be running the offense was up in the air for most of the summer, but Turner Griffin has a strong shot at winning the job and has taken a lot of snaps as the No. 1 QB. Battling alongside him for the starting job are sophomore Nic Neaves and junior Caleb Moore, both of whom could end up winning the job.

Whoever takes the team over and shows that they can help improve last year’s 2-8 squad will win the job.

Last year, running back was the highlight of the offense with freshman standout Collier Blair making a splash. This year, that will be the case again with the return of Blair, as well as Ethan Shaw and Vick Lindsey.

The biggest key for the running game is for there to be balance offensively from the passing game so the offense doesn’t become too predictable with the run game.

For that to be the case, not only does a quarterback have to step up, but he has to have some playmaking receivers to throw the ball to. Thanks to an athletic crew out wide this year, there shouldn’t be any excuse for not getting them the ball.

Seniors Reggie Fisher and Doug Wood will be deep-ball threats that can go up and make plays on the ball, while athletic slot or flex players will be Michael Gibbs and Lando Nichols. The Hornets will also have the luxury of returning both of its tight ends this year in Kaleb Tindall and Will Peacock.

On the offensive line, three seniors are poised to help this team have the production it needs offensively. Marc Moody, Logan Brasher and Garrett Evans will all be back with game experience, while junior Charlie Parkinson will also get a good bit of playing time.

Moving over to the defensive side of the ball, Goodwin is still trying to figure out who is going to work best at each position, but said seeing them in full pads during this stretch of fall practice will be key.

With the return of defensive coordinator Zeb Ellison, the Hornets were able to hang onto an extremely solid coach, who will help this unit improve.

On the defensive line, Warner Wright is gone after totaling 56 tackles last year, but defensive end Todd Justice is back as one of the leaders of the defense. He’ll be joined by Wesley Pouncey and Chris Knecht up front with several others battling for depth.

Linebacker always seems to be a strong suit for the Chelsea defense and that will continue this season with the return of Matt and Stephen Fant. The Hornets lose last year’s leader in Hunter Offord, but with the return of both Fant brothers as well as Coleby Clements and Cole Berryman, they’ll have a strong group at the unit.

In the secondary, the Hornets will return both Connor Griffin and Will Sullivan after both got a ton of experience last year. Ladarius Gary will also help out in the secondary, while others are looking to earn spots.

Another key player worth noting will be Xander Echols, who will be the team’s long snapper. Echols is considered one of the best long snappers in the state and will be a steady, trustworthy player in the kicking game.

Prediction: The biggest problem for Chelsea, aside from the timing of the coaching change, is there schedule. Each week, while the Hornets will have a chance to win every game, there is a team good enough to beat them. The start is brutal, taking on Oak Mountain, Briarwood, Carver, Jackson-Olin and Pelham before a bye week on Sept. 21.

In a region where Homewood and Pelham seem to be the favorites to finish first and second, they’ll have a chance to compete for one of the final two playoff spots. To do so, however, they’ll have to start fast, because they’ll at least need a win over either Carver or Jackson-Olin in the first two region games they play. If they do win one or both, then they’ll have plenty of opportunity moving forward. With the schedule they play, 5-5 would be nothing to hang their heads on, but with so many toss-up games, this team could still be a year away from the playoffs.

By ALEC ETHEREDGE | Sports Editor Last year, the Briarwood Christian Lions got redemption early in the season when they... read more