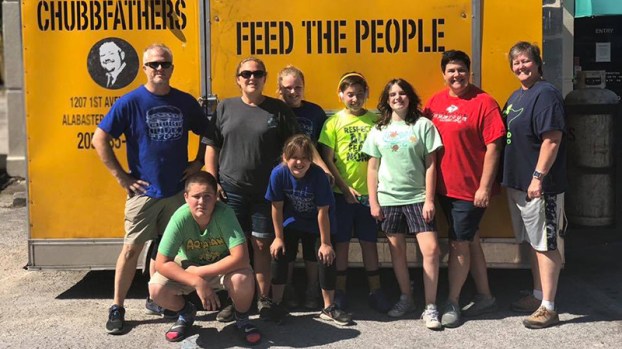 ALABASTER – Despite organizing a group of volunteers and developing a plan to transport the crew 200 miles from Alabaster to the Florida panhandle to help feed thousands of Hurricane Michael victims for free, Chubbfather’s owner Will Cholewinski is insistent all praise be focused on the Alabaster community.

“Those of us who went down there, we were just the hands. The people of Alabaster and Shelby County got us there, and they deserve a pat on the back,” Cholewinski said. “I was floored by the whole thing. It did my spirit good.”

After Hurricane Michael, a strong category 4 system, barreled through the panhandle on Oct. 10, causing widespread wind damage and leaving thousands without water or electricity, Cholewinski immediately began looking for a way to help out.

After getting connected with the Cajun Navy organization, he set up plans to bring a crew to Carryville and Marianna in Florida to help those affected by the storm, but he still needed funding to purchase food to serve to those in need in the two cities.

Cholewinski appeared on a local talk radio station and put a call out on the restaurant’s social media accounts, and the response blew him away.

In a little more than 24 hours, donors came to the restaurant and gave about $3,200, which Cholewinski used to purchase thousands of hamburgers, hot dogs and breakfast food items to feed to Florida residents who were struggling to rebuild their lives.

“Usually, I just ask for people to donate canned food items and things like that, but in this case we needed cash so we could get down there and help out quickly,” Cholewinski said. “I hope people know and trust me enough to know that we only used that money to go down there and feed people.”

On Oct. 14, Cholewinski and nine other local volunteers loaded up the Chubbfather’s food truck and traveled to Carryville, where they set up at the city’s community center and began serving free breakfast, lunch and dinner. A few days later, they moved east to Marianna, which was hit much harder by the hurricane’s high winds.

“There wasn’t mass destruction in Carryville, but a lot of folks were without power and running water,” Cholewinski said, noting the children in the group did not travel to Marianna. “In Marianna, the sheer destruction from the wind was absolutely crazy. The debris had been pushed off the road just enough to open up a path to get in and out.”

In the three days they were in Florida, the group of volunteers fed between 2,400 and 2,800 people thanks to the donations from Shelby County residents.

“We were feeding some people who had literally just been cut out (of their homes),” he said. “We had people who had nothing left coming and picking up food to take to their neighbors who were hurting worse than they were. It was an amazing testimony of hope and helping others.”

By GRAHAM BROOKS / Staff Writer HELENA – For those looking to get a jumpstart on holiday shopping this year,... read more