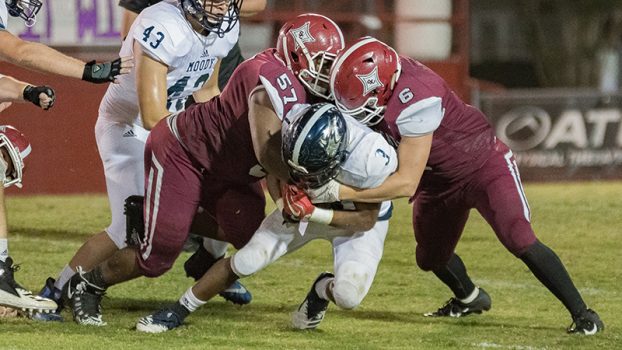 Shelby County lost a thriller against Central-Tuscaloosa by a final score of 50-44 on Friday, Oct. 19. (File)

Shelby County unable to rally past Central-Tuscaloosa, will miss playoffs

COLUMBIANA – Shelby County put together a high-scoring second half, but was unable to complete its rally in the final home game of the season, falling to the Falcons, 50-44, Friday night, Oct. 19.

“I’m proud of the kids. They played hard and fought to the end. We had an opportunity there at the end to make something happen. It just didn’t work out for us,” said SCHS head coach Heath Childers.

The Wildcats scored on two of its four possessions in the first half, but a bad punt gave Central a short field late in the second quarter, and the Falcons added a touchdown to lead by seven at the half, 21-14.

While the game remained close, the Wildcats were unable to stop Central’s junior running back Javonta Leatherwood, who racked up 377 yards on 34 carries and scored six touchdowns.

Shelby County pulled within a touchdown a few times in the second half, including a Chase Franklin touchdown to make it 42-36. The Wildcats pinned Central deep on the kickoff and looked to get a stop to flip the field, but Leatherwood broke a long touchdown run to go up 50-36.

The Wildcats answered with a Tyrese Goodman touchdown run with about a minute to play, but could not get the onside kick, allowing Central to run out the clock.

“We really had the offense going and had their defense tired. We had them back on their heels, but we couldn’t make a stop. You give up 50 points, you don’t deserve to win,” Childers said.

Franklin led the way with 104 yards on 14 carries, including two touchdowns, while Trinity Marshall added 80 yards on 14 touches and two TDs. Goodman ran two in and caught a touchdown pass from Chase Holliman, who completed 7-of-13 passes for 121 yards.

Shelby County (2-6, 1-4 Class 5A, Region 3) will close out its region schedule next week at Jemison.

Vincent falls to Reeltown, still has shot at playoffs

By ALEC ETHEREDGE | Sports Editor  VINCENT – Sitting inside the top six of the Class 2A football rankings the... read more